Save
Inside France's "Modernity, Promise or Menace?" - Special Mention Winner at the Venice Biennale 2014
Presented by:

This year's French Pavilion stood out as one of the best pavilions in the Giardini, communicating a clear, engaging thesis and receiving a Special Mention from the jury.

Curator Jean-Louis Cohen poses four questions throughout four galleries, demonstrating the contradictions that fill the story of modernity and architecture in France. The ambivalent responses of architecture to the original promise of modernity is shown through the juxtaposition of a continuous cinematographic montage (playing simultaneously throughout all four galleries) and large-scale objects.

Watch an excerpt from Teri Wehn Damisch's film and read the curator's statement after the break. For a virtual tour of the space designed by Paris-based firm Projectiles, follow this link. And make sure to keep an eye out for our video interview with curator Jean-Louis Cohen (coming soon). 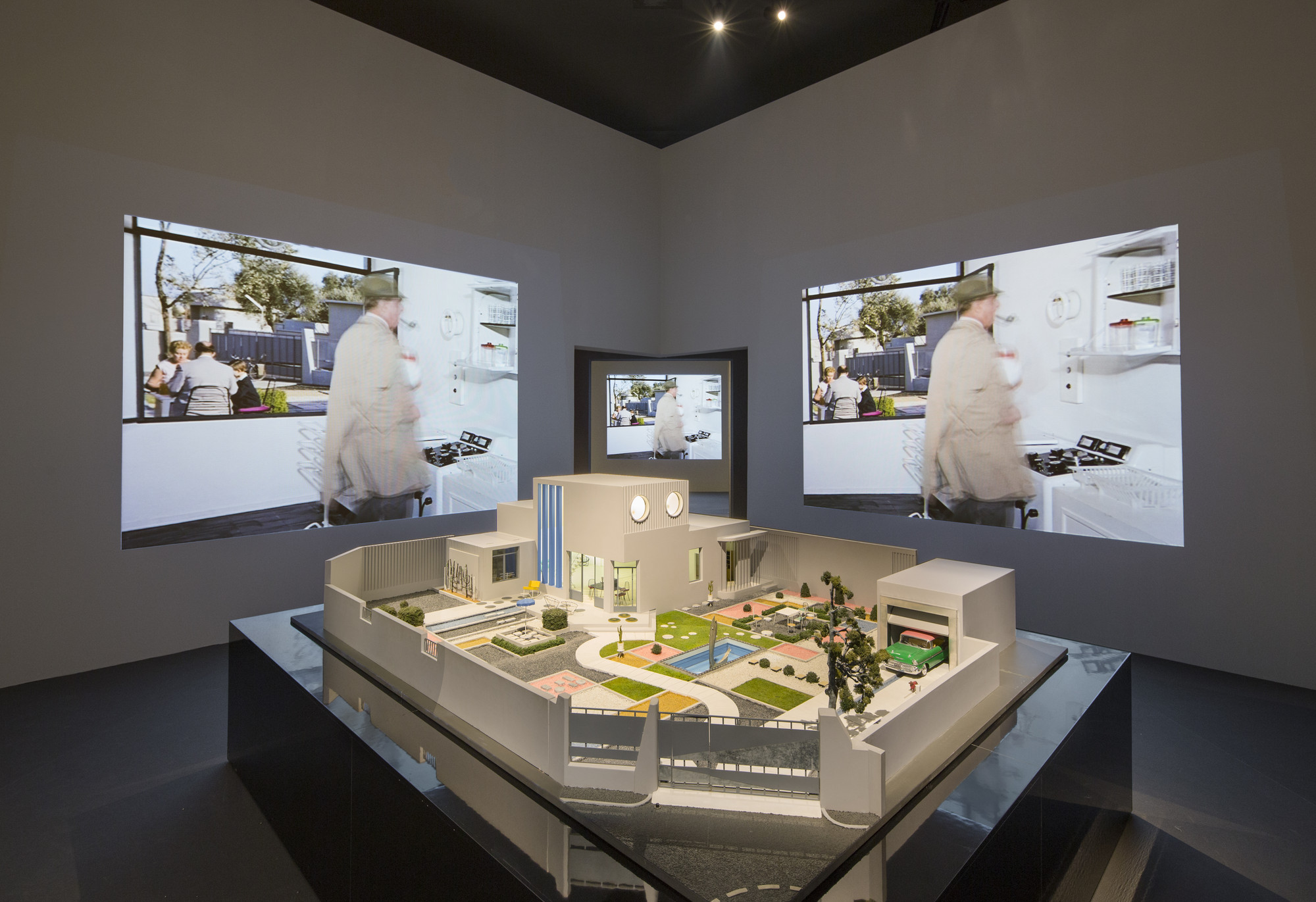 From the Official Catalog of 14th International Architecture Exhibition. Since 1914, France has not so much "absorbed" modernity as it has shaped it, through marking contributions of architects and engineers responding to the expectations of diverse components of society. As on many other national scenes, modern forms and structures have addressed the programs of social reform, materializing great hopes. But many of the expectations raised by remaking able experiments and flamboyant discourses have remained unmet. These "misfits" are discussed through four contradictory episodes marked by hope and disillusion, which are woven together by a large-screen film assembling propaganda footage and fictional movies.

Gallery 1 - Jacques Tati and Villa Arpel: object of desire or of ridicule? Featured as a very large-scale model, the miain character in Tati's film Mon Oncle (1958) was a provocative house. Far from contributing to a happy domestic life, the villa seemed to manipulate its users, comforting the French rejection of modern single-family houses.

Gallery 2 - Jean Prouvé: constructive imagination or utopia? Designer and builder of refined metallic buildings, for fifteen years the Nancy-based ironsmith Jean Prouvé gave extraordinary lectures in Paris, in which he built airplanes and automobiles, as well as architectural components, on the blackboard. Despite his successful contributions to many modern buildings, his ideas were scorned by big industry.

Gallery 3 - Heavy Panels: economies of scale or monotony? In post-1945 France, large state-sponsored programs led to the hegemony of the heavy concrete panels conceived by engineer Raymond Camus. His system was used in both West and East Germany and produced in Soviet factories, before being further exported to Cuba and even as far as Chile.

Gallery 4 - Grands ensembles: healing heterotopias or places of seclusion? In 1942, José Luis Sert set the Drancy housing scheme by Eugène Beaudouin and Marcel Lods as a prototype for post-war housing, just as it became a Nazi internment camp. This tragic metamorphosis reflects the ambiguity of projects built outside and against the city, and that are now being reorganized.