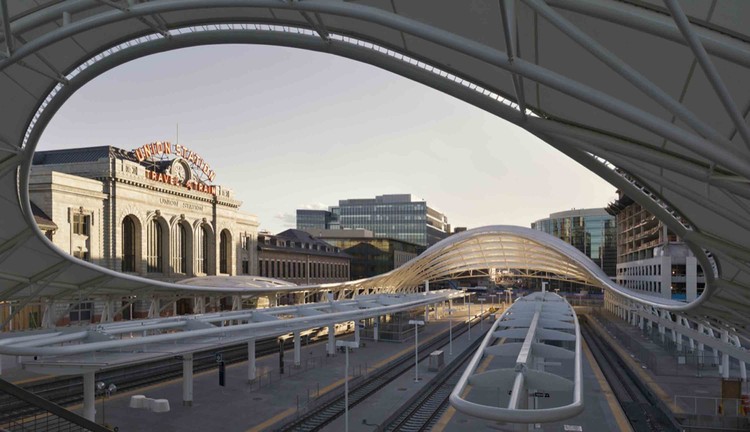 Text description provided by the architects. Denver’s historic Union Station is a Beaux Arts masterpiece located on the edge of the city’s central business district. SOM was commissioned to expand and transform this station into a major regional transportation hub. To do so, the firm converted 20 acres of former rail yards into an urban transit district that orchestrates light rail, commuter and intercity rail, bicycle and bus routes, and pedestrian pathways into an intuitive intermodal hub.

The focal point among these new elements is the open-air Train Hall, which was conceived as an efficient and formally expressive means of sheltering multiple railway tracks. Its primary structural system comprises 11 steel “arch trusses” spanning nearly 180 feet, clad in tensioned PTFE fabric. In profile, the canopy rises 70 feet at either end and descends in a dynamic sweep to 22 feet at the center, a gesture that allows the structure to protect the passenger platforms below, while remaining clear of the view corridor established to protect views of the historic station. Amtrak’s Zephyr trains— which zip passengers from Denver west to San Francisco and east to Chicago—now pull in beneath SOM’s soaring Train Hall canopy every day. In addition, four commuter rail lines are scheduled to open in 2016 and 2018.

A bustling, two-block-long pedestrian promenade at grade level links the Train Hall to the SOM-designed Denver Union Station Light Rail Terminal, which has carried nearly 10,000 passengers every weekday since it opened in 2012. An enhanced network of pedestrian and public spaces within and around the site now seamlessly integrates the hub into the LoDo (Lower Downtown) district to the east and newer residential neighborhoods to the south, west, and north.

Underground, the 22-gate Union Station Bus Concourse services 16 regional, express, and local bus routes. The terminal, measuring 980 feet in length, serves a dual purpose as a subterranean pedestrian concourse that connects the constellation of transportation programs distributed across the site. Vivid colors and natural lighting help passengers orient themselves, whether they are boarding buses, navigating to the light rail or commuter rail stations, or ascending into the capital city. Handsome terrazzo floors and sparkling yellow glass tilework elevate the ambience of terminal beyond the typical, often unimaginative depot experience, and a series of skylights and glass pavilions flood the hall below with daylight, infusing the station with a sense of motion and spaciousness.

One of the largest of its kind in the United States, the redevelopment of the former rail yards at Denver Union Station is a case study of the power of transit-oriented urban design. This substantial public investment has catalyzed an unprecedented wave of private-sector activity: Economists estimate that the project has already triggered more than $1 billion in private mixed-use investment on surrounding property. Sensitive to its historic location, but fundamentally forward looking in its technical sophistication and city-building spirit, Denver Union Station sets the standard for 21st-century intermodal hubs. 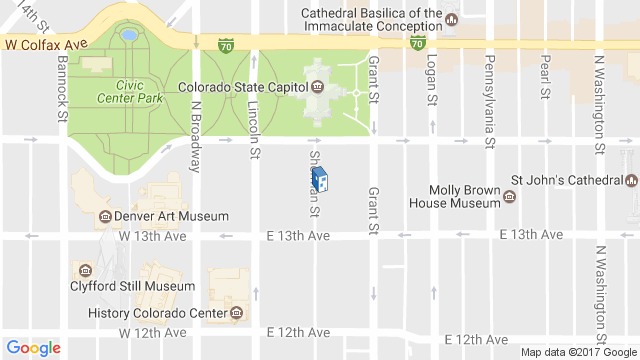 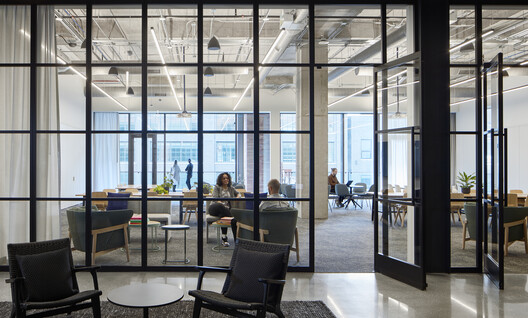