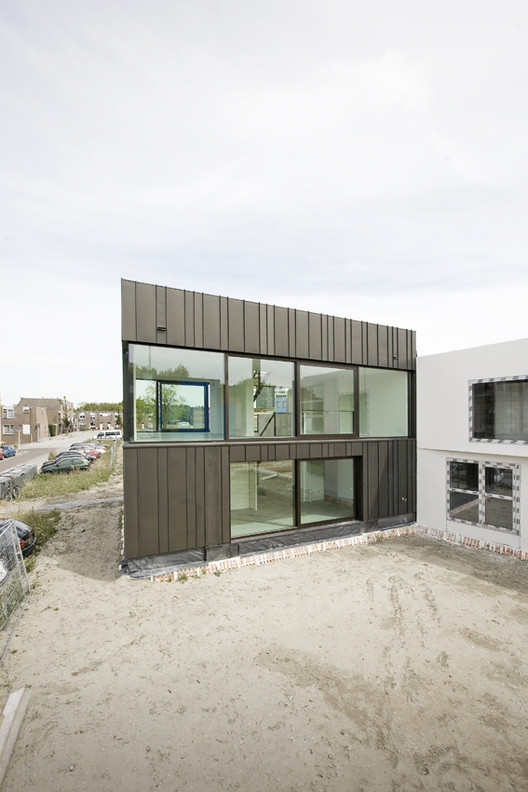 Text description provided by the architects. Up until recently it was rather uncommon in the Netherlands for non-professionals to develop private housing projects in an inner city context. In times of crisis however, the present Dutch government strives to put an end to this tradition by stimulating private investments in urban agglomerations. According to a Charta of the Ministry of Housing and Spatial Planning, one third of all new housing developments in the Netherlands must be developed by private clients.

The development of the former slaughterhouse area in the historical city centre of Leiden, the Netherlands’ oldest university town, is the biggest and the most representative example of its kind.

The remarkable house V21K01 of pasel.kuenzel architects is located on the edge of the historical city and is a new interpretation of the classical Dutch housing typology of the 19th century.

The skilfully detailed façade made from anthracite pre-patinated zinc, echoes the brick facades of the neighbouring buildings in a confident and contemporary way, without neglecting neither the scale nor the craftsmanship of its historical ancestors.

V21K01 is composed of two utterly different stories that allow reading the daily routine of the clients from the outside and that is crowned by a royal roof-deck.

Whereas the rather closed and intimate ground floor contains a specific sequence of spaces, the first floor is designed as a more generic space, a real Bel-Etage with a floor-to-ceiling glazed façade! The adjacent existing façades of the neighbouring buildings serve as visual limitations of the space itself and place the house in a very direct way in its historical context.

Finally the generous roof terrace crowns the house and establishes a stunning visual link above the rooftops between the building and the towers and windmills of Leidens’ historical centre.