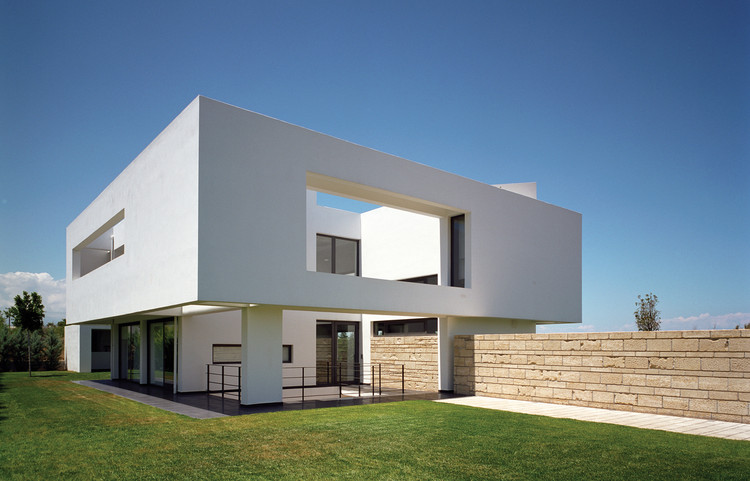 Text description provided by the architects. The residence is located in Ancient Korinthos. Taking into consideration the importance of the broader archaeological area, an excavation of 12x12 meters initially took place in the southern part of the site, determining the opening gestures of the project.

The “spirit” of the excavation, as well as the relationship of the building with the surroundings of historical interest, constitute the key programmatic parameters of the design, at a symbolic and a functional level.

The main concept includes a square shell in projection, which acts, both as an enclosure of the whole structure, as well as a borderline of the excavation area, functioning as a reminder of its existence. Inside this shell the residence is erected as an independent building, which pops up vertically from the ground as a “continuity” of the ancient constructions. Parallel to that, the southeast part of the excavation is left visible, as a historical evidence of the building continuity through the ages.

The residence develops at two levels. The elaboration of distinct spaces offers, at the ground level, continuous contact between the internal and external space, while at the upper floor, optional, open or close treatment of view through the perforation of the perimetric shell.

The construction of the building is based on the use of metal frame together with insulating concrete frames, which consist of a double layer of mixed, reinforced spray cement, and a layer of expanded polystyrene in between. The system combines minimal air losses, excellent thermal and sound insulation properties along with structural rigidity. The use of white colour and double-skin wall reduces solar gains during summer, suppressing cooling loads considerably. Low angle winter sun shines through the openings, but during summer, the above mentioned double-skin system forms overhangs, providing shading. 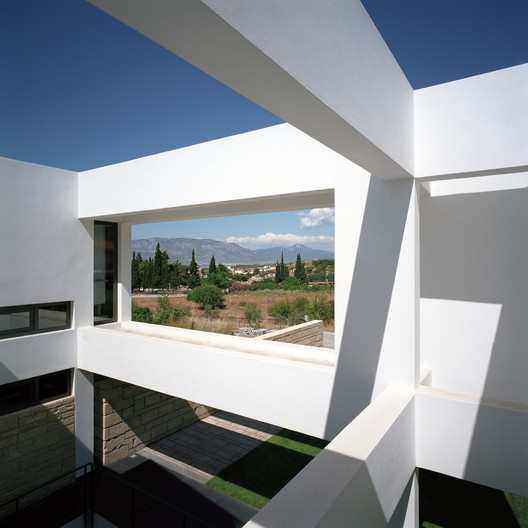