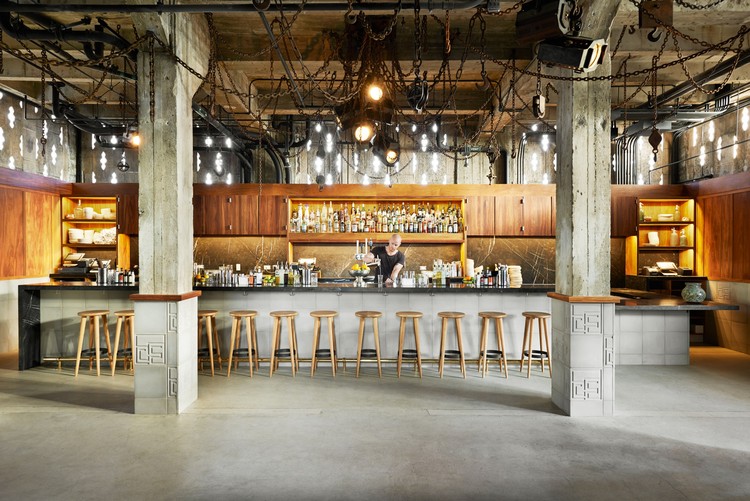 Text description provided by the architects. Ace Hotel Downtown Los Angeles opens in the historic United Artists building in Downtown LA. Built in 1927 for the maverick film studio, the ornate, storied theatre and tower stand as monuments to a group of seminal American artists pushing out on their own, and anchors the Broadway Theater District’s modern renaissance. United Artists co-founder Mary Pickford's love for the ornate detail and stone spires of Spanish castles and cathedrals is manifest at the theatre. It’s a true temple of the arts. The mixture of reverent awe and irreverent independence is right up our alley — this is the kind of project we dream of.

We partnered with Commune Design to breathe life back into the historic site. While the theatre's original design was a lush interpretation of the Spanish Gothic style, the tower's facade hid a minimalist poured concrete structure. Therein lies the basis for the concept at Ace Hotel's newest home: the marriage between decadence and democracy, between 1920’s Hollywood glamour and modern minimalism, is informed by a finely tuned ear toward the Broadway Theatre District’s latest revival — a modern renaissance we’re proud to be a part of.

Inspired by the idea of artist as independent producer, Mary Pickford — darling of the silent era — left Adolph Zuker and Paramount Pictures to realize her dream, joined by D.W. Griffith, Charlie Chaplin and Douglas Fairbanks. They turned to architect C. Howard Crane to build the United Artists Theatre and adjacent tower, which first served as offices for Texaco.

The movie palaces built in the 1920’s and 30’s ware marked not just by luxury and elegance, but by architects gone a shade or two rogue. The United Artists Theatre offers equal parts classic style, functionality — the advent of “talkies” called for the rapid development of modern acoustics — and a surrender to the glitz and excess of Hollywood. Sweeping design features and minute, delicate details combine to define the golden age of cinema.

We’re opening our doors in the heart of the ongoing Broadway renaissance. In the last decade, Downtown Los Angeles has seen an undeniable resurgence of the creative spirit that first arrived nearly a century ago with the United Artists founders. This time around, change started small – tenants moved into creative lofts and offices, party-goers found their way to underground events, and diners in search of the next new thing found it at restaurants like Alma, Bäco Mercat, Bar Amá, Orsa and Winston, or at the newly-renovated Grand Central Market. MOCA continues to curate world-class modern art exhibits and events, and Broad Museum joins the neighborhood next year.

Many of Broadway’s historic theatres are coming back to life alongside us, and the historic core of the area is gaining popularity as a walking neighborhood — a rare thing to find in the sprawl of the city. And with the arrival of Ace Hotel Downtown Los Angeles comes retailers that value the sense of community and dedication to forward-thinking design that we too hold dear — Acne Studios, Aesop, Kinfolk Studios, and Tanner Goods, among others, are moving into the retail outlets at the intersection of Broadway and 9th at the turn of the new year, and we can’t wait to call them our neighbors.

Ace Hotel Downtown Los Angeles offers visitors to the area a friendly place to gather — a hub for creatives, innovators, artists and entrepreneurs to meet, work, catch up, and to radiate energy outward into the evolving and vibrant neighborhood outside.

The project's facade was approached as an "interpretive" restoration — what would the building have looked like if it had been a hotel, restaurant, or theatre in the heyday of the Broadway Theatre District? The terracotta and plasterwork exterior of the building was stripped of decades of paint, carefully cleaned, and the iron grillwork restored. A wood storefront with molding reminiscent of Josef Hoffman's work was installed to frame stained glass windows, with transoms made by the legendary Judson Studios from an abstracted Gothic-inspired design. A sidewalk cafe spills from the restaurant onto the sidewalk outside, extending the Ace experience unto the neighborhood. The original theatre booth was long gone, so a new space — serving as a newsstand by day, and ticket booth by night — was designed in the deco style that appeared in Los Angeles in the late 1920's.

The building was stripped down to its minimalist concrete core, with design elements then layered on top. The original poured concrete ceilings and columns were strategically retained in most public areas and guest rooms. The public spaces in the hotel tower are intimate in scale, flowing naturally from one room to the next — the transition from registration, elevator vestibule, coffee bar, restaurant and into the mezzanine lounge is seamless.

The result is a singular experience, a collection of architectural and design references piled on top of one another. Gropius' office and the Bauhaus, Viennese cafes, Mission-style churches, Luis Barragan, Parisian modernism, Piet Mondrian, and Adolf Loos share space with each other, a nod to the irreverence and "no holds barred" design attitude of Los Angeles in the 1920's and 30's.

For the guest rooms, Commune drew inspiration from Rudolf Schindler's residence in West Hollywood. Original concrete ceilings were maintained, with homasote on the walls for sound absorption and warmth. The furniture in the rooms is made of dark grey-tinted Medium Density Fiberboard. The bathrooms, equipped with unlacquered brass fixtures, are separated from sleep and living spaces with steel and glass windows. Guest rooms feature custom Ace x Revo Radios, wings+horns bathrobes and bath products from Rudy’s Barbershop and Pearl+. Noguchi lamps and Pendleton blankets woven in a Mondrianesque pattern complete the space. Select rooms include C.F. Martin & Co. guitars and Ace x Rega RP1 turntables. A great deal of attention is placed on efficiency — there's a place for everything, and an outlet near at hand no matter where you are.

The aptly named Upstairs rooftop space was transformed into an indoor/outdoor lounge and pool inspired by Frank Lloyd Wright’s Ennis House and the legendary Hollywood night spot Les Deux Café. Upstairs features a concrete bunker-like bar with a light installation by costume designer and returning Ace collaborator Michael Schmidt, made of hundreds of feet of vintage steel chain and barn hardware, with salvaged original theatrical lights found in the theatre. The concrete pool is inspired by Donald Judd’s pool in Marfa, and is adjacent to a courtyard lined with steel frame windows and patterned canopies by local artist Alia Penner. Ceramic lanterns hang from a Coral tree, positioned in the center of the courtyard near the outdoor fireplace. Furnishings are a combination of Equipale-style and ‘Pencil’ cedar pieces by Joshua Tree sculptor Alma Allen. Custom light fixtures in the outdoor area were made by Robert Lewis Design, who has also worked with Ace at our property in Palm Springs.

Landscape designer Matthew Brown created an installation faithful to the era of the design and construction of the building — it’s not intended to awe or impress, but to create a sense of home and comfort, to provide a sanctuary from the city. Flowing 'San Diego Red' Bougainvillea cascades from the rooftop, with Boston Ivy and Creeping Fig vines patterning the walls and windows of the rooftop lounge and pool area, would have been found in the garden estates of the founders of United Artists and their friends. The Naked Coral tree that anchors the rooftop lounge provides periodic guests to Ace a sense of seasonal change — something unexpected in Los Angeles, but noticeable to a careful eye.

An Ace restoration of the historic United Artists Theatre is available for concerts, premieres, private screenings, conferences, seminars, performances and creative gatherings in 2014. The original murals and intricate plasterwork inside the theatre were restored, while theatre seats were reclaimed and reupholstered. New carpet with a Yin and Yang pattern, inspired by the original ceiling the mezzanine, was installed, along with a new Deco-inspired ticket booth in the façade. Built in 1927 in a Spanish Gothic style, the historic theatre offers 2,300 square feet of lobby space with a 35' ceiling, 1,600 seats and a 783 square foot event space. 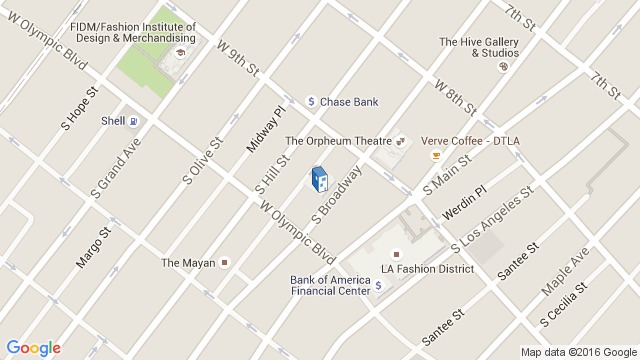 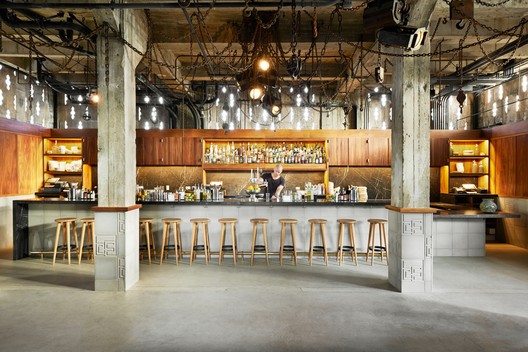