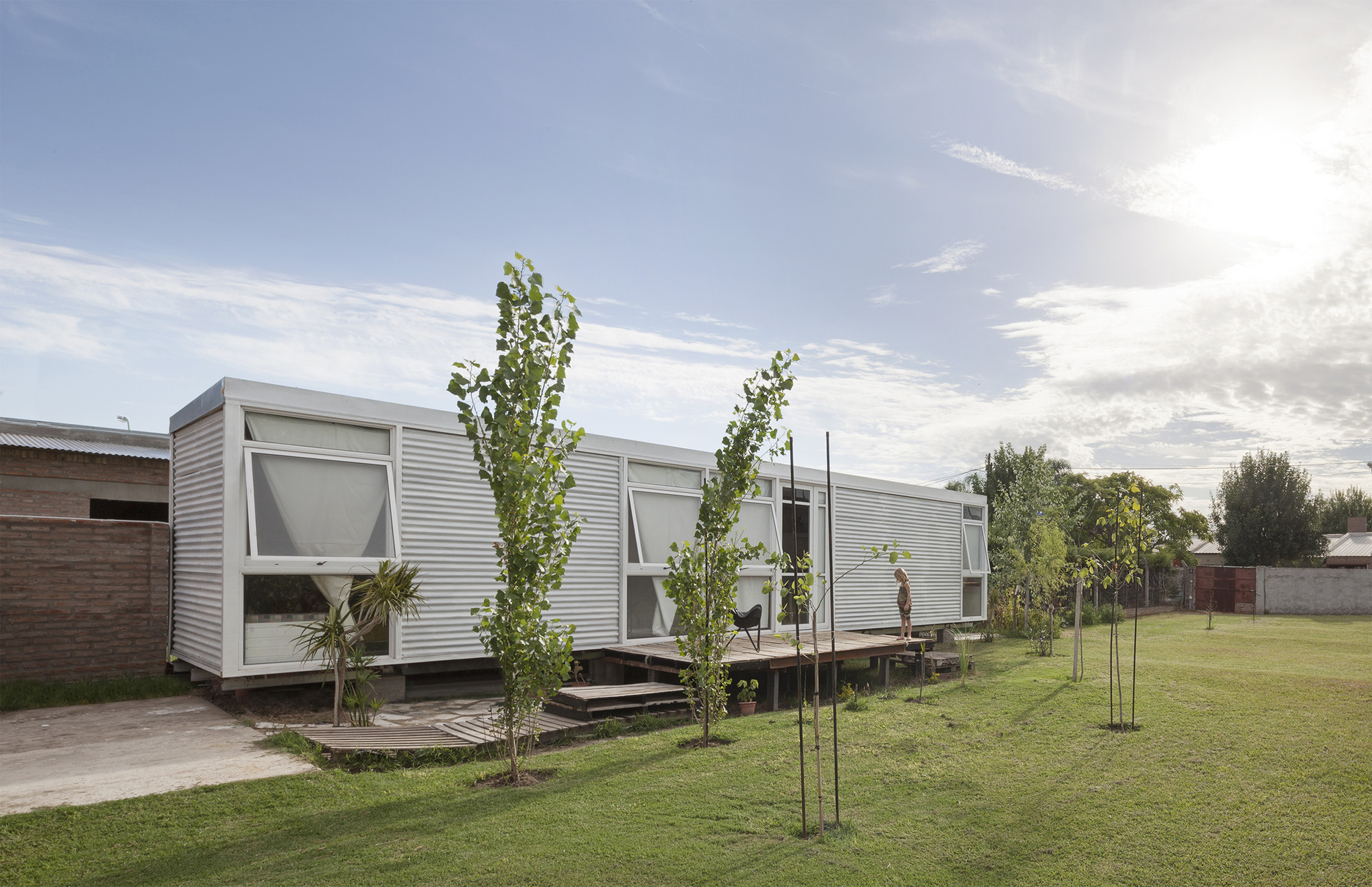 Text description provided by the architects. This housing prototype is located near the city of Santo Tome - Santa Fe, in a residential neighborhood, where the "neighborhood scale" and its habits predominates.

The project arises from being able to create a simple housing core, both in its design and its execution. The main objective was to build a small core that meets the basic functions of a home, so we decided to work with industrial materials that are easy to install and operate.

The core is modulated based on the predominant material, profiles, sheet metal, aluminum (12mts, 6m, 3m, 2.40 mts), which in turn is related to the modules of the materials used for interior finishes, drywall and wood. Thus it was possible to optimize each constructive element of the set, avoiding any type of waste and recycling as many components as possible.

Pallets used in gallery - expansion, several types of ceramics, recycled parquet flooring and their combinations constitute the finishes, allowing us to minimize construction costs. But the greatest optimization was achieved in the actual construction of the work. During free time, with the help of family and friends, with simple machinery such as a drill, a grinder and a welder, the assembly of each of the components was achieved, which makes this project very unique and valuable.

Functionally, the 36m2 core (12m long x 3m wide x 2.40 m high) consists of a kitchen with a living room and work desk, a bathroom and a master bedroom. The furnishings and maximum use of each space were crucial to develop as many activities inside, built-in functions that take advantage of every square inch, emptying the space in the center and using the sides for support. One cabinet contains the sink and kitchen items stored, it becomes a library and ends with a large supporting board. Being such a small space, we decided to work with the minimum possible amount of materials and colors, giving as a result 2 colors; natural wood floors and furniture, and white dominant on the rest.

Continuous floor to ceiling windows allowed visual and spatial continuity between inside and outside, and in turn its module became part of the perimeter enclosure, achieving simplicity in the finishes.

Technically, the block rests on small precast concrete pillars (blocks), that are the only wet elements of the construction. From them arises the main structure of folded metal profiles, which supports the "box" of pipes that make up the perimeter of the house. The same structure supports the building envelope, exterior (plates) and interior (boards). The metal cladding was wrapped with injected spray and added to the system of cross ventilation, the suction of fresh air from the floor - removal by wind power make the weather inside. The entire project - not counting the aluminum frames and polyurethane spray - was built with unskilled work (ourselves) in 10 months.

Technically, the modules of the profiles, plates, pipes, allow each piece to fit into place, with the possibility of expanding its space to new modules, and in turn allow the reuse of its elements for such expansions, or to move the core to a new site.

A linear, white volume elevated from the ground constitutes the exterior image, with the characteristic of each of the materials exposed: metal sheet, profiles, aluminum and glass; highlighting with the green surroundings, so that at each point of the interior spaciousness and continuity is achieved.

In short, we aimed in this project for an architecture that considers the authenticity of its own materials and their assembly, by providing a simple and clear reading, a relationship between the industrialized, the recycled and the natural; and above all that fulfills its main function, to generate a living space with few elements.