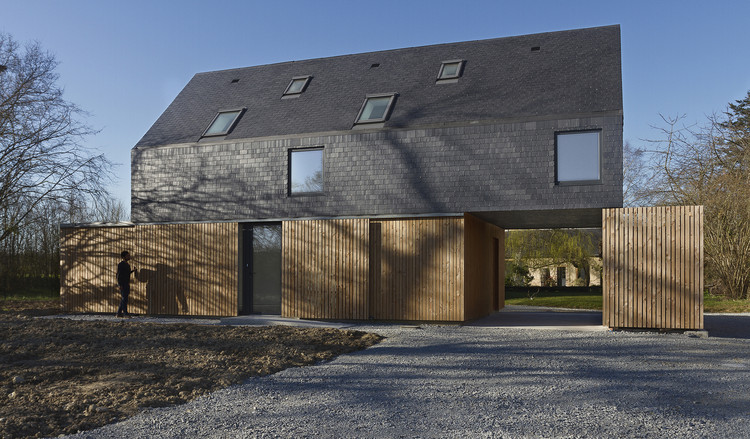 The lot is situated in the residential suburb of Bruz, in France. The house is facing a park on the South and West side.

When working on the project, we had in mind the traditional style of house typical to Brittany.  These are characterised by a compact and simple volume with a two slope slate roof.  Since we could not create openings of more than 1.4 metre, we used brise soleils to enclose the first floor completely. When fully open, the brise soleils have a width of 6.5 metres, offering excellent views to the nearby park.

The program is divided on two areas.  The ground floor is an open space which is open to the public.  The first floor meanwhile contains all the private rooms.  Two voids were created in the first floor.  A staircase was built into the first void.  A balcony between the living room and the dining room, was brought into the second void.  These voids create diagonal connections between the two floors.

The environmental impact of the building has been reduced by the large openings on the South facade, the brises soleils, the North side blind facade, and a 25cm thick insulation has been incorporated into the timber frame and a crossing ventilation system. 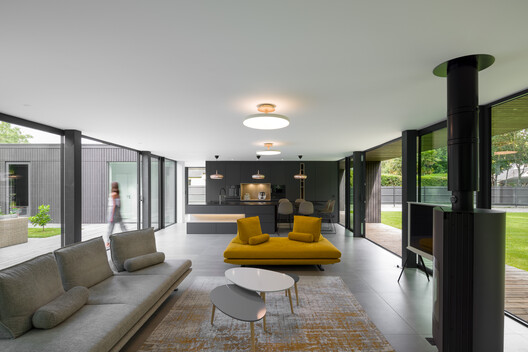