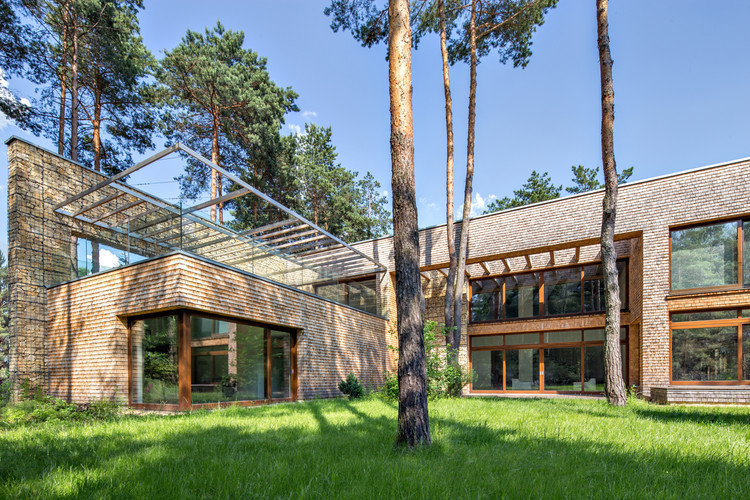 In Izabelin Północny near Warsaw, at Białego Orła street, a villa of shingles and gabions was built to a design by Barycz and Saramowicz Architectural Office. This imposing, luxurious residence is contrarily called A Little House in the Forest, with reference to a playful name of the pre-war villa of the great Polish writer, Melchior Wańkowicz, located in Żoliborz in Warsaw (“The Tiny House”), as it is located on a beautiful plot of land, covered with old pine trees. It is a dominant form of the landscape at Izabelin, located at the gates to the capital, which is an enclave within the Kampinoski National Park.

The essence of the design task was to find such a shape and texture of the building to acquiescently incorporate it into this unusual landscape of exquisite natural beauty. Hence, the idea of stylizing the facade with a combination of natural shingle of oak lath with a very innovative material derived from hydroconstruction, such as gabion baskets, which were filled with dolomite from the Libiąż district.

The implementation of a cyclopean wall of gabions was a pioneering technical challenge, since the Polish architecture dealt with this creative material for the first time in such a great extent. Baskets filled with crushed stone were used, Triassic stone (dolomite) from the deposits in Libiąż, with a grain size of 85 - 220 mm. The gabions were properly arranged, composed with mathematical precision and had the following parameters: the height of 50 cm; the width of 25 cm, or locally 50 cm; the length of 150 cm, 100 cm and 75 cm, respectively. The wire thickness was adopted as 4.5 mm, the distance of wire mesh at 76.2 x 76.2 mm. It was a 350 g/m² galvanized steel wire, with a tear resistance of 450 N/mm².

To fix the gabions, a specific cross-section of the outer walls was determined, which were made from the inside of Wienerberger ceramic hollow bricks, used to build a single-layer wall; then a structural layer of reinforced concrete was applied, to suspend the gabions there. They were attached using a 40 mm-wide flat bar with Koelner anchors of 30 cm spacing. Pull-out failure load of such a connection was calculated as 13.05 kN/lm. At lintels, cantilever support system was used.

Gabions are derived from hydroconstruction. Their original name comes from the Italian language, where the word “gabbione” means “a large cage”. Their most frequent form is a rectangular basket made of steel rods or a mesh filled with stones. Originally, they were used to reinforce slopes, embankments or river banks. The military version of the gabion, the so-called “Hesco barrier”, is used on a large scale by armies to build temporary defenses and internal shields in military bases against enemy fire attacks. This military association was especially close to us; after all, our intent was that the outer wall of the villa had a raw, defensive character. The gabions have created a kind of a “wicker weave of stone”, replacing a traditional building wall.

The villa includes and combines the two aesthetically different worlds which are expressed through the materials used. The internal world of the villa - warm, cozy shingle - stands in opposition to the external, slightly technological one – the gabion baskets filled with stone. Therefore, what was created, is a house in nature, fully integrated with the science and technology of modern times, whose modesty is to embed it in the environment in a harmonious way. In order to protect the privacy of the inhabitants, the massive gabion wall was located facing the urbanized area. In contrast, the elevations extending into the garden have a shingle facade, which is to correspond with the natural trees growing on the property, making the villa an inseparable part of the environment on the basis of mimetic architecture.

Shingle is a raw material deeply rooted in the Polish building tradition. Shingle was used in churches in the regions of Podhale, Spisz and Beskid, including those listed by UNESCO World Heritage in Dębno Podhalańskie, Lipnica Murowana, Sękowa and Binarowa, as well as in Orthodox churches in the Carpathian Mountains (including those of the Lemkov, Bojkov and Halicz type), manors and country houses. Both the facade shingles and stone baskets feature intriguing textures and therefore they resulted in an interesting chiaroscuro effects of the elevation.

The Forest Villa in Izabelin is an exemplification of Barycz and Saramowicz's architectural philosophy. The Polish modern architecture in the twenty-first century must be avant-garde and hypermodern, yet distinct, not imitative, but deriving from its own history and tradition. It stems from the culture and in relation to this culture it builds its identity. In our view, the architecture must be like the music of Chopin - a crowning achievement in its universal dimension, and at the same time marked by theoriginal native imprint. Modernization of space, while maintaining autonomy and originality, is the main task of our architectural thought. 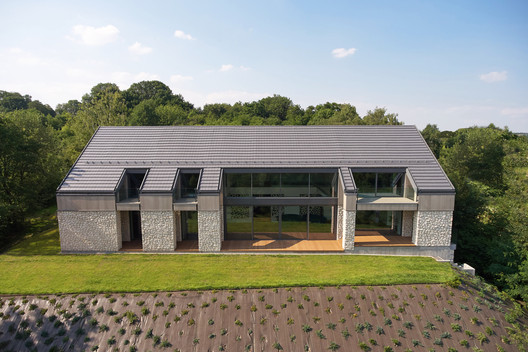