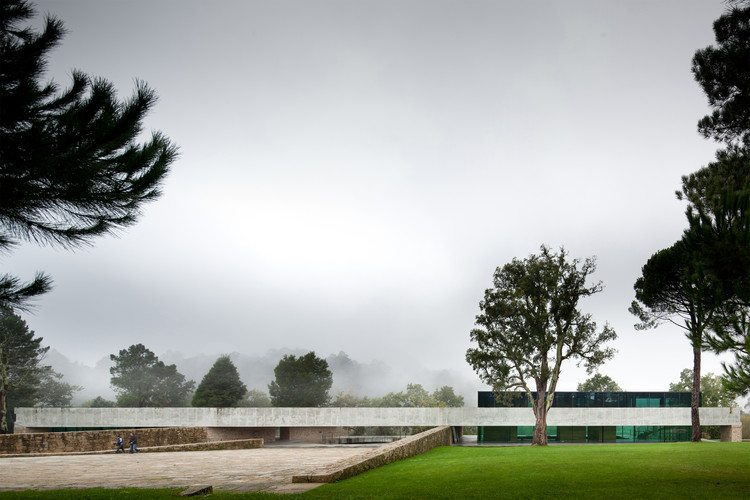 Text description provided by the architects. A densely wooded land by the bank of the river Minho, a natural frontier between Portugal and Spain, near the village of Monção.

The order to design two houses, on the same ground, for father and son. The son, a well known builder in the area, for whom I was already drawing a small four apartment building in the urban area of Porto, was prepared for the proposal I was presenting for his new house.

So, I’ve decided to join the two houses in only one body. It seemed logical. Briefly: one concrete flagstone (84x16m), prestressed, a modern gesture to lodge two houses (in glass, painted iron in forge and pinewood), supported in modern but traditional granite walls.

A strong gesture looking for the balance with the landscape. At the core, a circle, an ellipsis, a place where a tree can be born, a sculpture, or just the space that was left and conquers the place.

The permanent search for conciliation between the modern technologies of building with the more traditional construction in this area, which allows the dialectics between the horizontality of the great voids by the ingenuous  use of the prestressed, taking the concrete to its limits, along with the roughness of the great blocks of stone which, juxtaposed,  draw big walls in the landscape.

The shape and the tectonic sense of the building have joined together to establish a connection with the place, transforming it into a part of the landscape, preparing the future reaction of the materials as an active dimension of the project.

The building has a base, buried on the ground, a garage, an interior swimming-pool, projecting itself on a slim concrete volume, over the hillside, destroying the adopted camouflage. On the first floor, a metallic volume, all in glass but able to melt within the landscape.

Everything is drawn by the architect, from the iron frameworks to the furniture made of ebony and pine, making us remember the churches’ altarpieces made of stone, in this case, made of concrete.

Energetically speaking, we have adopted geothermics as a way to ensure the energetic balance of the building as a whole, ensured by the integration of buried intubations in the great surfaces of the surrounding ground. 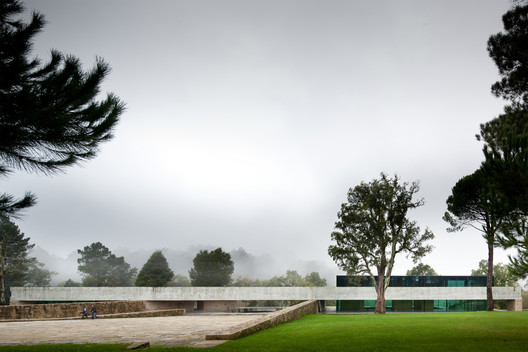