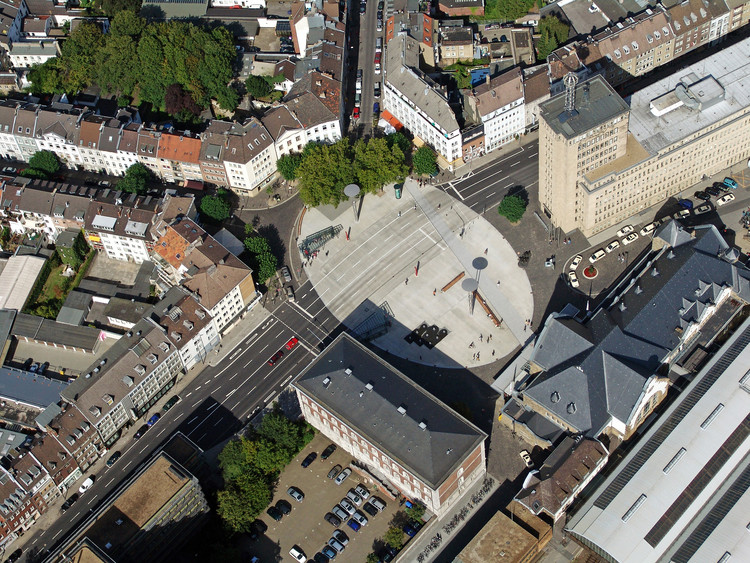 Text description provided by the architects. Public open spaces are the living areas of cities. If the marketplace is the “livingroom”, the station square is the “Entrée”.

A neatly arranged urban space was designed at the station square in Aachen to serve as an attractive entrance to the city. The new station square represents the image of the city and the railway and is now an iconic part of the Aachen.

In the 19th century an elongated open square was built forming the link from the main station to the bordering streets such as the former boulevard Theaterstraße. The square contained an equestrian monument and water basin in front, and a horseshoe-shaped road around the edge for traffic.

The main focus of the project was to rebuild the station square as a unified open space by bringing the two halves of the square back together. This was achieved using a large dominant elliptical shape covering the whole square. The ability to easily integrate, and the strong yet simple geometric nature of an ellipse made it the perfect choice for reuniting the square. The orientation of the ellipse also helps to direct pedestrians from the station to the inner-city.

The light, slightly curved elliptical surface (cast-in-place suitcase, joint grid 2.50 x 5.00 m) is highlighted by the dark basalt slab used to cover the remaining areas of the square. The bare design of the square removed clutter and untangled the traffic flow creating an event area to serve as the heart of public life in the city. The incision of the busy street – which couldn’t be lowered because of financial aspects – trough the square is balanced by two 14m high light-poles at the focal points of the ellipse. The light-poles contribute to the spatial orientation, especially in the evening when the whole ellipse is lit by two large circles of light.

A stone-carpet path is overlain on the ellipse to guide travelers from the main entrance of the train station to Bahnhofstraße and the inner-city. In the evening the path is framed by a light-track. Rest areas are in the northern square semi circle and near the main entrance and the water fountains. A concrete arch with an integrated bench is located at the north end of the square in front of a line of trees and two wedge-shaped bus stops flank the square as gateways to the city. Also a new line of trees was planted on southern Lagerhaustraße to support the optical reduction of the opening at the Zollamt.

Key points in the design were the improvement of the accessibility to the station for local and long distance traffic and the removal of traffic on the square. The Alleenring has two lanes in each direction. The delivery and priority vehicle driveway can be reached by Zollernstraße. On the northern square is the residential and delivery driveway forcing both busstops to be shifted onto the stone-carpet. 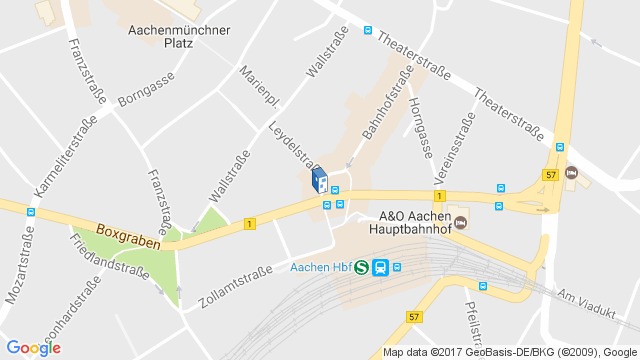