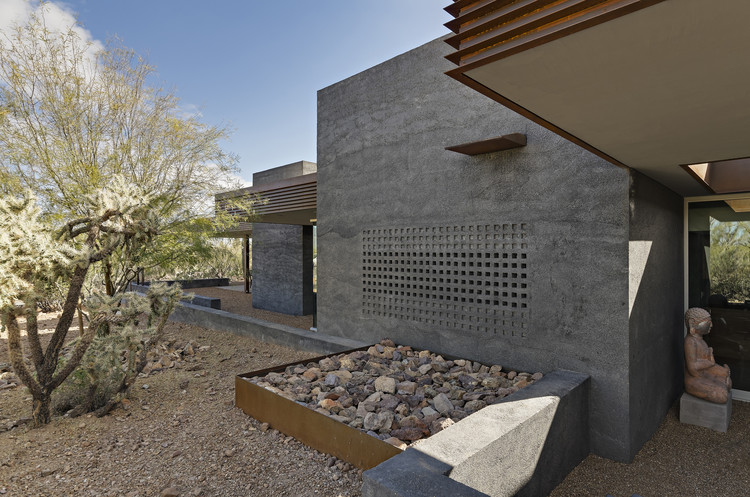 Text description provided by the architects. The Tucson Mountain Lava House is situated within the eastern alluvial flow of the Tucson Mountains, a terrain that falls gently toward the Santa Cruz River. Defined by a wide drainage to the south, the landscape is richly populated by low-lying bedrock outcroppings, saguaro and barrel cacti, palo verde, ocotillo, jojoba, and creosote.

The site offers panoramic views of the Tucson Mountains to the west and the Santa Catalina Mountains to the northeast, views that are occasionally interrupted by power poles and neighboring structures, and by automobile traffic along a lightly-traveled road to the north. The formal and site-based objectives were to anchor the structure into the existing geology and to weave its spaces between existing water courses and mature Sonoran Desert vegetation, while minimizing the visibility of nearby human imprints from within the space.

The composition is anchored by a series of intentionally shaped and placed mass walls oriented primarily North to South, that give rhythm to the formal sequence from East to West as viewed from the exterior, and a modulated spatial sequence as experienced from within.

These divisions work to differentiate the more public spaces from the private.  Massing is developed to best protect the structure from late afternoon summer sun while concurrently exposing one to the full prospect of the drainage to the South and the expansive landscape to the Northeast . Additionally, the enclosure’s refinement is rooted in a response to the arc of the drainage to the South.

Held within the walls are floating horizontal roof planes, offering harboring shade which aid in the framing of distant views.  Exterior spaces are captured under the broad overhangs and further defined by low retaining walls, dividing domestic outdoor space from the native landscape.  By placing the residence above the edge of the drainage, the spatial experience throughout is characterized by a contrast between the enclosure of foreground vegetation to the North and an elevated prospect over the drainage to the South.

This residence marks a significant step forward in the development of scoria as a mass material, in this case used to define the building envelope. Its anchoring walls are cast monolithically with a mixture of crushed volcanic cinder quarried from the San Francisco volcanic fields in northern Arizona and a small percentage of cement. A relatively dry mixture, scoria casting requires less bracing than a conventional concrete formwork. It can therefore be used to create a robust and expressive mass enclosure in less time and at less cost. Cast in lifts, walls are reinforced and thermally broken. Sheets of rigid insulation are cast into the walls, biased to the exterior to isolate interior thermal mass from the thermal conditions of the exterior environment, a critical component when addressing the diurnal temperature variation in arid lands. Once the material has set, forms are removed and the finished wall is “dressed” with a light sandblasting to reveal its raw, sedimentary quality. It is then sealed to ensure moisture repellency.

The use of scoria for exposed geological walls has been an ongoing collaboration between the product’s primary inventor Paul Schwam of LAVAcrete, and Paul Weiner of the Paul Weiner | DesignBuild Collaborative. The Tucson Mountain Lava House is noteworthy for its advancements in forming complex scoria features, including back-to-back fireboxes, integral recesses for sliding doors and other components, and a perforated grid of apertures that not only reveals the thickness of the wall, but also provides daylight and intentionally obscured views into the landscape. The geologic and geographic origins of scoria as well as its mass and texture offer salient possibilities for bridging common desires of desert dwellers—connection to the earth, exposure to vast views of the surrounding and distant landscape and quiet, protected refuge. 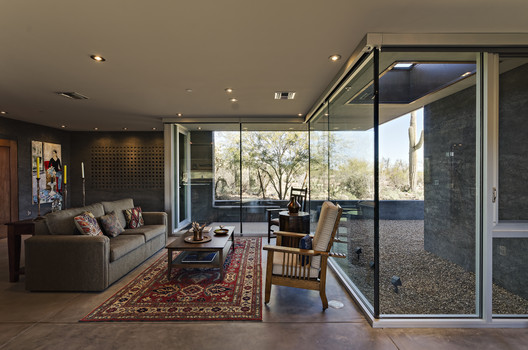