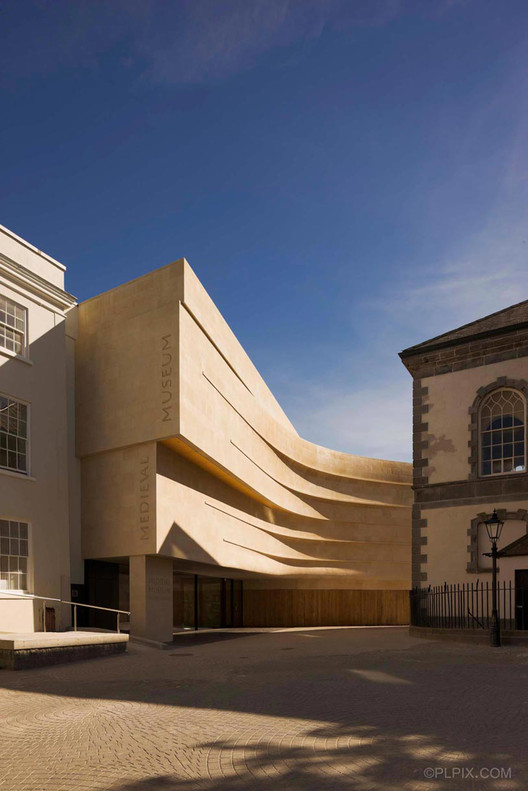 Text description provided by the architects. Waterford Medieval Museum is a new architectural landmark and major visitor destination in the Southeast of Ireland. The Museum is located in the urban quarter, the oldest part of Waterford City and at its vibrant cultural heart, known as The Viking Triangle. It houses a magnificent collection of artifacts and hosts numerous public events.

A diverse range of medieval, 18th, 19th and 20th century buildings constrain the site boundaries to a U-shape with the open end facing directly onto eastern façade of Christ Church Cathedral.

The objective was to design a building that would strengthen the characteristic of the historic tissue while, at the same time, creating something new and contrasting with the existing architecture.

The front façade is designed in a semi-circular, streamlined form, which is 'wrapped around' the back of the Neo Classical Cathedral, creating a link between the two beautiful squares on each side. The warm Dundry facing stone follows from its use in the original medieval Cathedral and Choristers’ Hall and provides a break from the cool crisp 18th century surrounding structures. The curved façade is like a big jigsaw - no two stones are the same, each one is unique and individual. More than a façade of a building, it is a large-scale architectural sculpture. There is an emphasis on the two gables, both visible from surrounding squares. A six metre high figure - ‘The Waterford Lady’ sculpted on west gable is based on a tiny 13th century belt mount found during the archaeological excavations on site.

At the approach to main entrance, glass vision panels provide views to the carefully conserved Choristers’ Hall below. The entire width of recessed glazing that slides apart allows interior of the ground floor to be open onto Cathedral Square and the border between the inside and outside disappears.

One of the design challenges was to incorporate the medieval structure of Choristers’ Hall located below ground level into the new building. Internal layout was strongly influenced by the shape of the site and adjoining buildings. There are four levels to the building: two levels over ground floor consisting of exhibition galleries and audio visual theatres, the lower ground floor level is a multifunctional space and provides direct access to the Choristers' Hall. The ground floor incorporates the entrance lobby, museum shop and reception.

The structure is designed entirely as cast in situ concrete. Material palette was restricted to concrete, Irish pippy oak, heather Welsh slate and the mentioned Dundry stone for the facade.

In 2014, the Museum has received LAMA Awards for the Best Public Building and The Best Heritage Project categories as well as the International Civic Trust 2014 Award .

The success of this design is due to the collaboration of people from diverse backgrounds: architects, artists, historians, engineers and craftsmen. This amalgamation of different disciplines within the design team, allowed achieving this unique result. The building was designed in house by Waterford City Council Architects, Rupert Maddock, Bartosz Rojowski and Agnieszka Rojowska. Agnieszka and Bartosz are now working independently as the newly formed ROJO-Studio Architects. (www.rojo-studio.com) 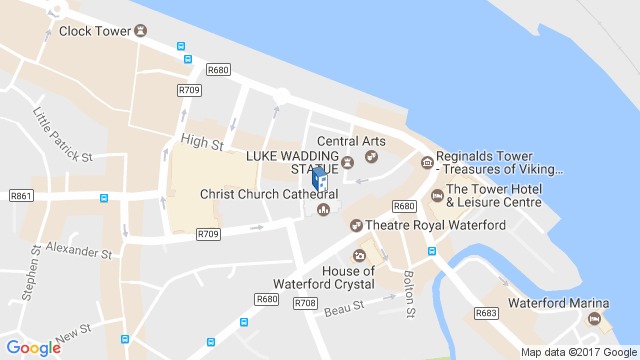