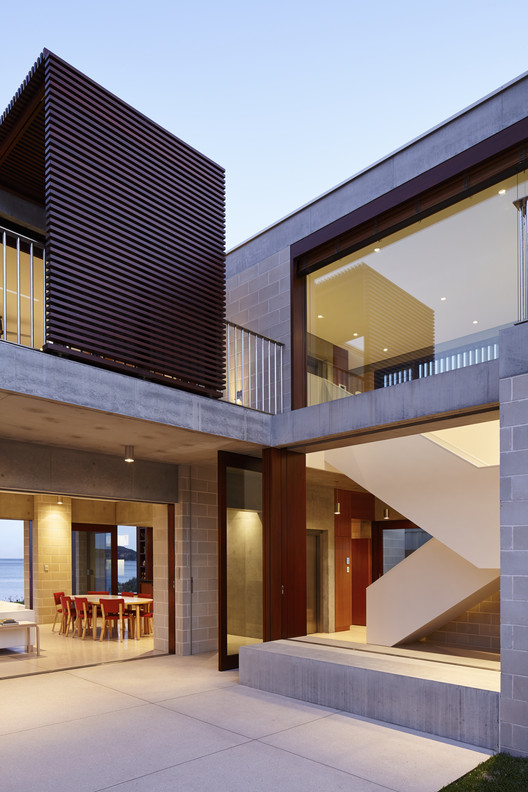 Text description provided by the architects. Situated on the shore of Pearl Beach, an area where the bush meets the coast, the Block House is a secluded escape designed to respond to its surroundings. Pearl Beach is formed by two coastal headlands and is defined by eucalypt bush to the north and south and a rainforest to the west. Contextually the house relates to the sandstone cliffs and caves of the surrounding headlands and heavy waves on the beach, which in turn influence the form and materiality of the building.

The internal courtyard is formed by two wings, providing an external enclosure protected from harsh onshore winds. The courtyard not only acts a private sanctuary for recreational use, but allows for consistent and controlled ventilation and sun access throughout all spaces in the house.  L-shaped single room planning allows movement between interior and exterior spaces to remain unobstructed.

Raw and heavy elements pay homage to the surrounding cliffs and caves of the area. A simple palette of materials requiring minimal maintenance and finishes, along with precision in detailing, create the light sensibility of the structure.

Operable layers of the facade generate the transparency of the house where visual and physical connections are established to the surrounding features of the site. Furthermore, sliding timber shutters and cavity sliding windows and doors allow spaces to open seamlessly, blurring the demarcation between inside and outside.

The outcome is a thoughtful sequence of meticulously crafted spaces forming a house that celebrates the act of living on the beach.