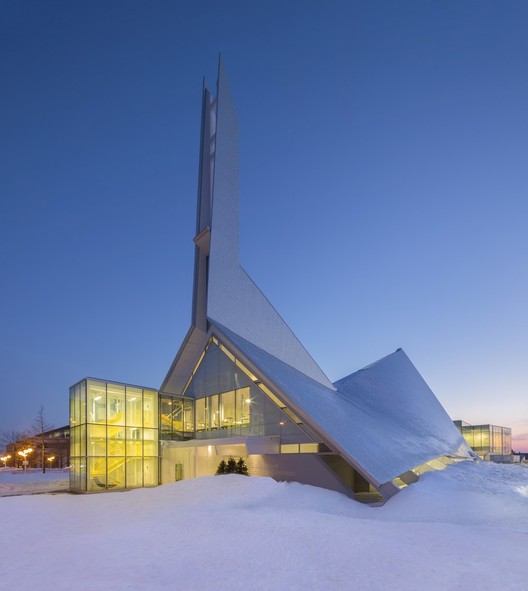 Text description provided by the architects. The Monique-Corriveau Library, housed in the Saint-Denys-du-Plateau church, is an exception, and in a rather unusual way. It is a tribute to the career—exceptional for her time—of the Quebec writer whose name it honours. This mother of 10 children, to each of whom she dedicated a book, was the author of numerous children's books and winner of several literary awards.

The St. Denys-du-Plateau Church, a remarkable creation of the late architect Jean-Marie Roy erected in 1964, was part of this renewal (second Vatican Consul), at once architectural and religious.

Converting and expanding such an eloquent example of modern Quebec architectural heritage is a very delicate operation which must be approached with respect and humility.[...] Saint-Denys-du-Plateau Church deserves this special consideration due to its unusual, dynamic volume, which evokes a huge tent inflated by the wind and anchored to the ground with tensioners.

The nave houses the library's public functions, with shelves and work and reading areas, while the addition contains the administration and community hall. This separation of functions means that the community hall can be kept open outside library opening hours, while the spectacular and monumental volume of the nave is preserved, since the architectural concept is to transform the space into a model of spatial appropriation as a reinterpretation of the interior.

To accentuate the fluidity of this volume, the solid soffit above the window has been replaced by glass panel which allows each beam to visually slip seamlessly to its exterior steel base, a revelation of visual continuity.

The volume replacing the presbytery and community hall occupies the same footprint and was executed in clear, silk-screened and coloured glass panels. It is separated from the library by a void, marking the transition from old to new. At the front, extending the structure of the choir-screen and the canopy, a code-required emergency staircase is housed in a coloured glass enclosure signalling the new place, dominating a new parvis, reconfigured with street furniture, trees and other greenery. Building on transparency and reflection, the architects have made a strong statement with colour at the ends of the building, an allusion to the vibrant, bold colours of the 1960s, which contrast the whiteness and brilliance newly captured in the remarkable form of the original church. 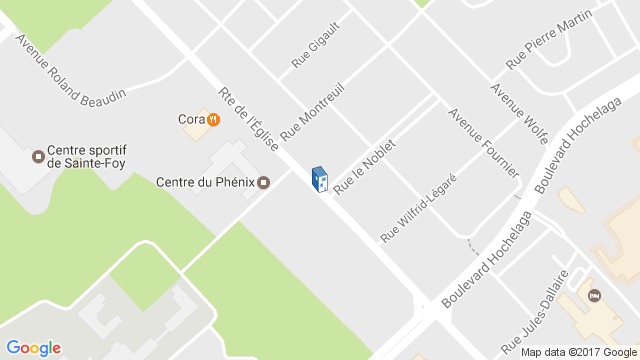