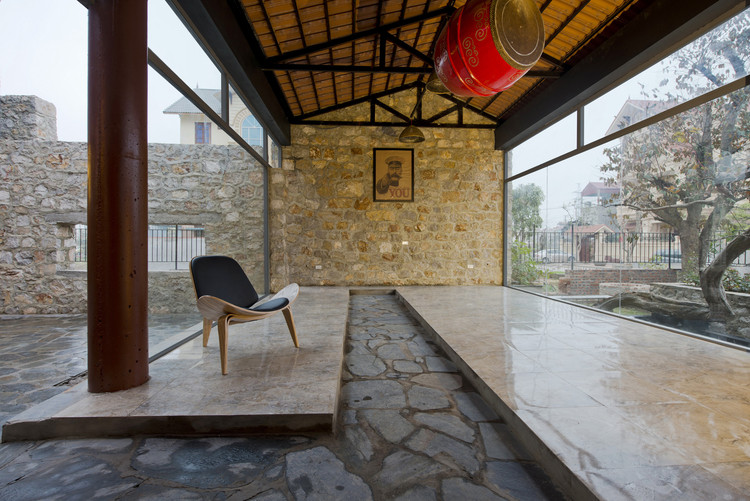 It is easy to build a new urban which is beautiful, comfortable, spacious, and airy. However, it is not easy to create the spirit-inspiring place, especially in Vietnam where new urban are currently blooming, rather like each other and duplicate a lot of French classical architecture.

A 700-metre-square plot located in one urban area and the owner is a youth. Behind the wheels of hurried life, it is time for him to contemplate what he needs ... He wants a eminently-local and indigenous-nuances space.

The project is located in Vietnam's ancient capital - Ninh Binh province where religion is diverse and complex, especially there is a parallel existence, even mix, of Buddhist and Christian (the West and the East). Faced an urban with complex architectures style, we are actuated to approach the design in terms of "nation" and “local identity” which we define as a cultural space. The place is for communicating, thinking of past, and also conducting business.

The work is formed by a series of stone walls (stone is taken from local area, built by local people in traditional way). The 70-cm-thick walls are combined to create architectural contrasting spaces: Close - Open, Inside - Outside, Old - New, Soft - Rough.

In the hollow space, we "drop" into the block and vice versa. By the hollow space, natural elements such as sunning, raining, winding directly enter the house. This way makes the house become environmentally friendly with typically tropical and traditional characters.

The house is divided into the independent spaces which can be accessed from the main lobby and each space brings the owner different feeling. The space concepts are taken from traditional space of Northern Vietnam:

- A Village Pagoda - It often has a drum. Before starting the village fair, people often beat a drum to perform some rituals, and then the festival entertainment activities happen.

- A Village Pond – It is a public space where, in the past, the Vietnamese often come to get water for daily activities, take a bath, get laundry. These village ponds usually have a lot water-fern.

- A Front Yard – It is for relaxing, taking the air, receiving guests, taking a nap.

- A space for singing and entertainment activities.

- An old brick fireplace – It will help people to remind a part of village in Vietnam. The old brick fireplace has been providing mainly building materials for people. It is now gradually disappearing, and for many Vietnamese elderly, it is only in memory.