Save
The Re-wrapped House / A D LAB 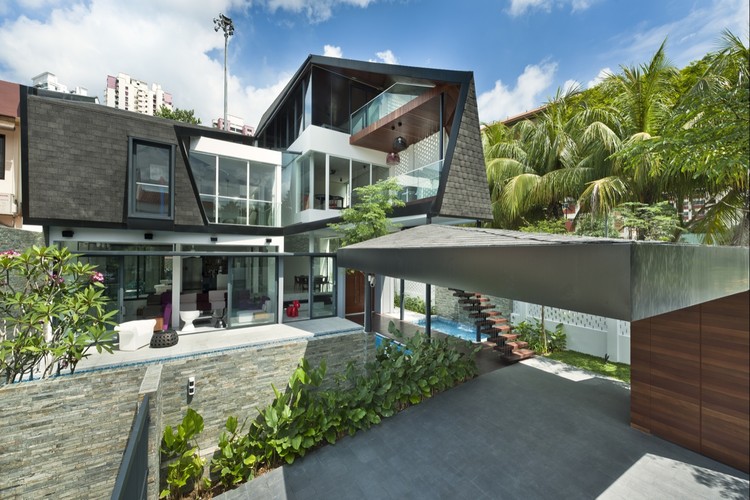 Text description provided by the architects. This quiet low-rise cul-de-sac of semi detached houses at Jalan Binchang is similar to many in Singapore.  Constructed mostly in the 1970’s, the pairs of two storey brick houses are now at the stage in their building lifespan where renovation is eminent.  The designers saw the development of the quaint neighborhood and its natural evolution as a main source of inspiration in the design of no. 67 Jalan Binchang.  They brainstormed on how to enlarge and rejuvenate the existing semi detached house while maintaining a harmony with the existing built environment, the history of tropical residential buildings and with the natural environment.  The designers looked at the existing building as one would study a living organism that needed to adapt to a new environment.  Instead of demolishing its embedded history and reinventing it as something completely new, they decided to use its structure, its internal logic of organization and meaning as a starting point to the design, and to build upon this pre-existing pattern and structure to evolve it into a new form and space.

The architects find it important to study how space can evolve with time and with the changing conditions of the inhabitants so that the lifespan of construction can be increased.  Also as a way of reducing waste, savings cost on the project, and minimizing disruption to the neighbor’s house, the designers decided to retain the entire 2-storey semi detached house on the site.  Between this structure and a newly added 2 storey plus attic extension, a gap between the old and new structures was kept to bring light and wind through the house as well as to allow for the settlement of the new structure independently from the old.  The internal building’s logic of the front facing public room, rear facing services and private second storey of the existing house was maintained and carried over to the side extension.

In another effort to minimize material, as well as to link the two structures together, the designers used the 5th elevation of the house, the roof form, as the main façade of the old and new parts of the building.  They bent and folded this form around the top and sides of the house.  This roof was conceived as an evolution of the traditional sloping gable tropical roof and retains the history of the visual and function importance of the roof in the tropics.  The organically wrapping independent roof creates an insulating buffer between the harsh tropical sun and the internal and external living spaces below.  An example of resource efficacy in the design is the use of simple, locally available materials to construct a “breathing” wall out of organically organized painted brick on the North-East face of the building.  This multi-functional permeable wall helps to cut down noise from the nearby Category 3 road of Bishan Street 22 as well as allows the prevailing winds to flow through the building and to reduce heat in the house so as to lower the building’s dependency on air conditioning.  Aesthetically, this breathing wall creates beautiful patterns of light across the inner surfaces of the house, creating a calm and peaceful atmosphere where space is in harmony with its history, its climate and with the natural elements.