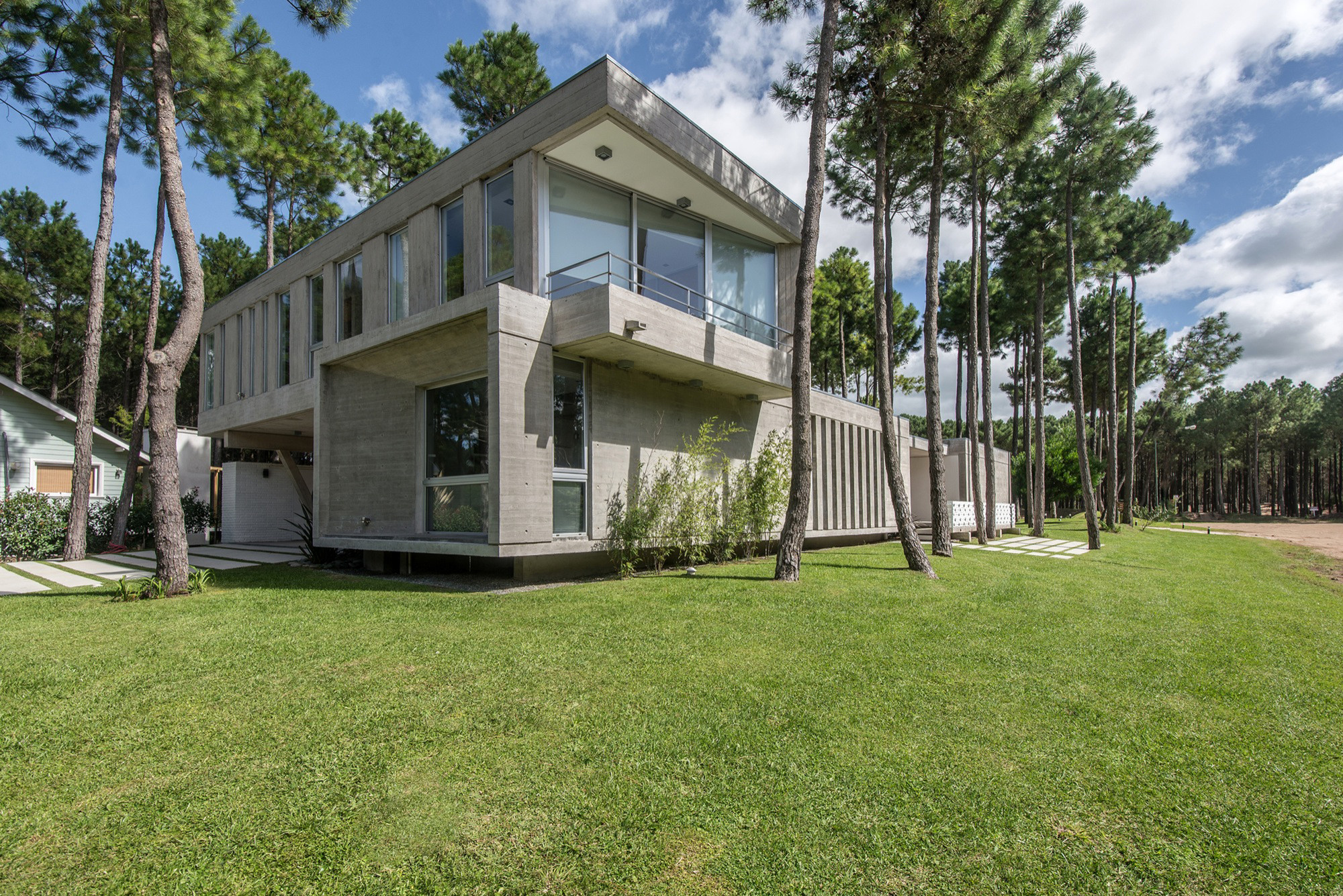 An almost level corner lot, within a pine forest in the north of Pinamar. A vacation home to be rented to different users. Thus, a program of flexible needs.

The house was projected around three conditions: to be lifted from the natural level terrain in order not to modify its original contours, to occupy the biggest amount of frontage length at Fragata la Victoria Street in order to increase the apparent size of the house, as well as closing off the views from the street into the heart of the site (preventing the private areas from being exposed to the street) and to reduce the costs of future maintenance.

Two overlapping boxes at the corner form an ‘L’ in two levels, creating the separation of the program by levels.

On the upper floor, the level for private use is oriented towards resting: three bedrooms and two bathrooms. In the extremes of the plan, the bedrooms open to the incredible surroundings marked by the corner and the heart of the block, and the pines which work as vertical bars in the forest.

Below this level, there is a semi-covered garage and an unobstructed white-painted-brick volume, which shelters the grill and other services. Like a wedge, this volume slips under the bedrooms yet closes the views from neighbors without touching the rest of the construction.

On the ground floor, a double concrete wall with expanded polystyrene core was projected. This wall serves as a thermal/heat and noise insulator, as well as a protection against glances that may disrupt the user’s tranquility. Being aware of the relationship between the street and the corner, the concrete wall is interrupted, leaving bars of concrete in front of the enclosure in order to allow the entrance of sunlight. In the corner, the concrete box opens to the outside through folds which help to expand the exterior view from the inside, and which, thanks to its funnel shape with the retracted profiles, reduce the interior view from the outside.

Towards the middle of the block, the concrete box is cut with bars of glass and wood which are located in another level, protected in the depth of the lot. Access platforms and a low brick wall give access to the house. Once inside, views of the forest of pines blend with the different spaces: a bedroom to the right, a dressing room and bathroom on the ground floor, thought out for a hypothetical disabled user who cannot access to the upper floor. Living room, dining room and kitchen supersede each other, interacting with the garden until ending in the corner.

The bars and the light

The sun and its path lead to different scenes though out the house. Openings in the cover slab, in the inside as well as the outside, generate daily games of light and shades. Two circular openings over the entrance, two fixed glass panes over the dressing room and bathrooms on the ground floor, and the comb-shape concrete pergola, create different spaces as time passes by. Reflections on the concrete and the mirrors transform the static space into a dynamic one.

Lastly, formwork through holes, which during the building process are used so that threaded rods go through the walls and hold the formwork when the concrete is poured, are now used as light lens. Built out of bars of acrylic, they carry the sunlight to the inside during the day, generating spots of light over the folded surface of the wall; while at night, conversely, the exterior face is lighten with the transferring of the artificial light.