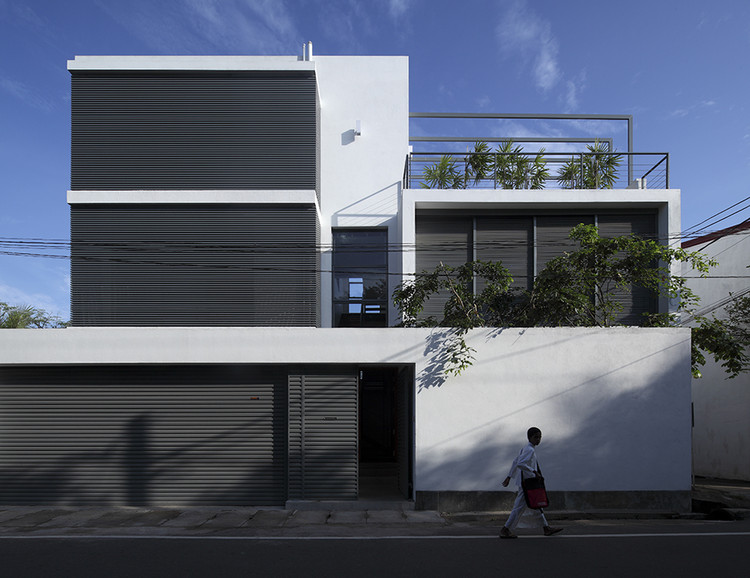 Unassuming and minimalist in its principles, this quintessentially cube-like abode sets a criterion for the conception of seamless space in a constrained urban environment. During the daytime the house exudes simplicity and is modest in appearance. At night, however, the house is transformed into an urban “lantern” emitting subtle light; the illuminated interior becomes visible to the outside through intricately treated fenestration. This duality confers an element of drama on the building. Stylistically, however, the house reflects neither the organic nor the vernacular tradition but is a logical response to climate and urban setting.

With limitations of a10-foot setback and a building footprint of less than 3.5 perches, the 6.79 perch site located in Woodland Avenue, Kohuwela, is constrained for space. The client’s requirement of a four bedroom house with natural lighting and space seemed a near impossibility. However, through concealment of beams, columns hidden within walls and creation of large openings to the exterior an articulate progression of spaces has been achieved. Experienced from the inside, the house’s interaction with the outdoor natural environment is evident.

At ground level the living and dining spaces fuse with the front and rear terraces that extend from it. The inside-outside separation has been minimised through the use of large clear glass sliding windows through which one sees the internal timber floor continuing to the exterior decking – with no differences in levels. On an evening of entertainment, therefore, one could utilize the terraces as an extension of the living area since both spaces are visually and materially integrated.

The central stairwell is the pivotal element around which all the other spaces are organized. The glass skylight above the stairwell brings in natural light which subtly percolates down through the open stairs to the lower levels, creating a constant play of light and shadow that enriches the monochrome white spaces. The stairwell also acts as an air funnel.

The UV-coated glass roof open at the ends for air to exit, contributes to a vacuum effect due to negative pressure being created at this level on account of warm air rising up from the lower levels and constantly cooling the building. This functions as the main climate regulating device in the house.

Since this space looks on to the main road, the fenestration had to be treated with dual filtering layers of glazing and louvers. Both offer options for varying levels of desired privacy and ventilation for the user.  The bedrooms, inclusive of the master bedroom, have attached terraces that are screened for privacy.

The glazed sliding doors provide an opportunity to amalgamate the terraces with the interior. This enables the spaces of the rooms to spill out effortlessly on to the outdoor terraces. An added feature is the roof top terrace with its unobtrusive planting: a quiet garden space has been created here to engage with nature.

The materials used, the rich black and tan of the Kumbuk, the ochered Teak, cement shades of the floor and the grays of the louvers and window, stand out against the white walls softening the harsh white light from the outside to create a rich and quietly glowing ambience.

The end product unifies within its folds the two mutually exclusive concepts of “minimalist” and “ostentatious. It is an elegant example of contemporary space that has transcended programmatic requirements in a manner that is both functional and aesthetically pleasing.