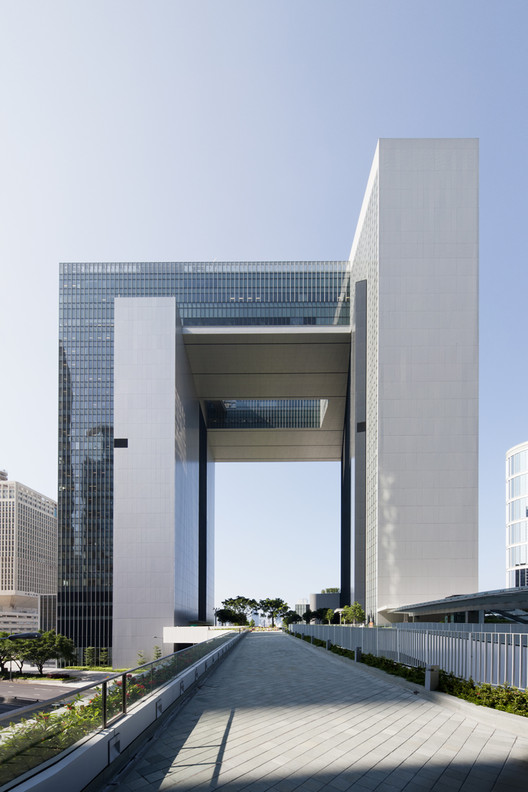 HKSAR Government Headquarters is located at the historical site of Tamar, a former naval dockyard. It is an intricately composed Government Complex, integrating three principal facilities: the HKSAR Government Offices, the Chief Executive’s Office and the Legislative Council Complex. The design projects a unifying composition, while each facility maintains its identity and expression befitting to its function. The two wings of Government Offices are joined together at the upper level, creating the visual metaphor of an opening door. The Legislative Council Complex and the Chief Executive’s Office flanking the Civic Park project forward on either side, signifying their independence as well as their dialogue across the landscape. The landscaped Civic Park, or “Green Carpet”, penetrates the heart of the project linking the city with the waterfront, gives Tamar back to the citizens and brings them right through the heart of Government.

The design concept of the Project embodies four themes:

With a grand gesture of opening up the site from the city to the Victoria Harbour, the project is a visual icon projecting the spirit of Hong Kong: a city always open and receptive to new ideas and diverse cultures. The Open Door also symbolizes a city which is justifiably proud of its openness and transparency of governance.

On a human scale the Complex is a civic icon, where greenery takes centre-stage and architecture assumes a supporting role. The Door gives way to nature and lush landscape. The “Green Carpet” that connects the Harbour through the Door leads to a multitude of people-friendly venues, including a sculpture Court, the Legislative Council Garden, an amphitheatre, a floating deck, the Legislative Council Square and the Tamar Corner, all for the enjoyment of the public

Sky will be Blue

HKSAR Government Headquarters demonstrates a passionate commitment to embrace a cleaner future, with emphasis on sustainable design contributing to a concerted effort to bring back the blue sky. Disposition ofthe blocks allows the prevailing wind to penetrate the inner city providing ventilation through the Open Door passage, it also allows solar access to the site from the south, while the stepped heights of the buildings allow airflow mixing and recirculation, channeling wind from higher elevations to enhance air ventilation at pedestrian level. Besides, innovative façade design systems are adopted to achieve sustainability for the development.

People will be Connected

The essence of the design for people is on connectivity, dialogue and communication. On a physical level, the design starts with a macro-view of the urban form adopting a strategy that brings on a seamless connection of urban green nodes, from Hong Kong Park to Admiralty Gardens to the future waterfront promenade, making the place and the waterfront accessible to the public with ease and fluidity. To enhance this connectivity, the Legislative Council Complex and The Chief Executive’s Office are located one on each side of the site, on the same axes as the Central Government Offices East Wing and West Wing, flanking the central park area and angled towards the Waterfront to create unity for the whole development, being set in more than two hectares of open, green and freely accessible areas for the public.

On a symbolic level, the design is an iconic gesture to unite the diverse functions of Government, the unfolding architectonic planes symbolizing the desire to make a better city where diversity flourishes with effective communication between people and Government.

HKSAR Government Headquarters does not seek to play an overly symbolic role as a public edifice, but rather functions urbanistically on a daily basis as a vibrant, integral part of the city’s life. In weaving a major public place through its heart and thereby connecting the city with the harbour-front in a celebratory gesture, it is a Government Headquarters with few precedents elsewhere. 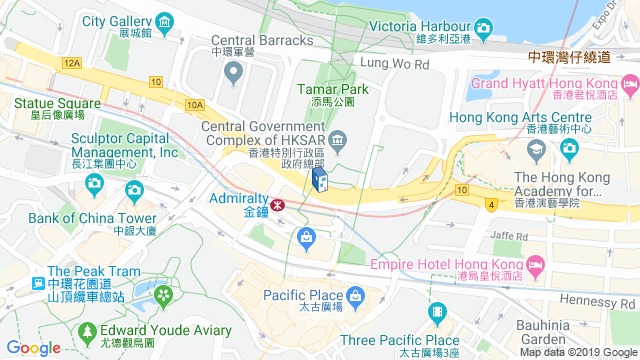