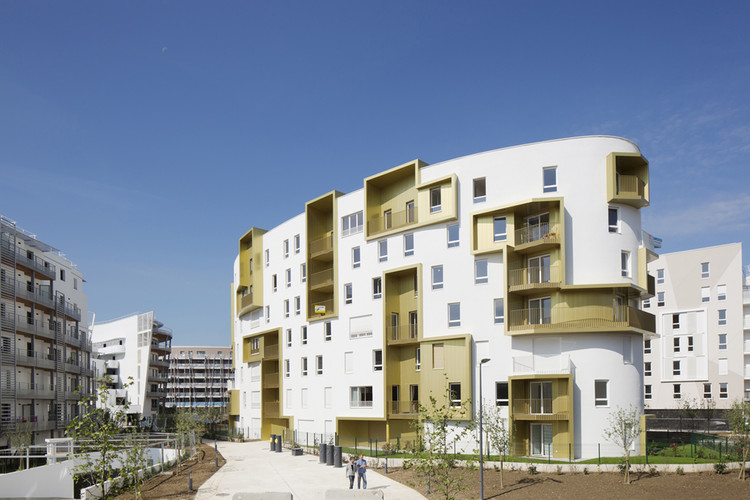 During the period of the Prussian invasions, the politician Adolphe Thiers erected defensive walls around Paris named after him. Between 1841 and 1845, 16 forts were built around the city. One after the other, they lost their military status. Among these military wastelands, the Issy-les-Moulineauxfort, known today as the “Digital fort”, an eco-district project carried out notably by Bouygues Immobilier. This grouping gathers 18 blocks of residential flats, a day nursery and two school complexes. Concerning leisure, the curtains have been recycled into two-kilometre-long fitness trails; a swimming pool and a bowling pitch have also been created. If the programme has somehow been thought as a garden of Eden, the developers have meant to give digital touch with a systematic optical fibre cabling of the buildings and home automation.

An ellipse to fill in

Within this multi-authors programme, the building lies within a wider urban project with various authors. The general plan of the fort and of thus the shape of the blocks was designed by the French team of Architecture Studio which won the 2000 competition. Guerin & Pedroza chose to respect that shape while giving it a strong identity. The seven-storey building has 74 flats —from studio to five-bedroom— arranged along central corridors. The bigger ones are duplexes.

The situation of the villa in the northern part of the fort, along a north/south axis, offers a special view on the east of Paris and opens widely to the south on orchard. Each flat is made specific by hollowing out or filling in the façades. Thus, the orientations either follow the original geometry of the building or that of new the openings.

A precious and useful touch

A series of polymorphous inclusions make the regularity of the general plan more dynamic. A bright golden cladding adds value to those spaces carved into the white volume. It stages the balconies, loggias and terraces where the inhabitants will enjoy the outer living areas. At sunrise and sunset, lights and reflections will be enhanced for the pleasure of the users.

Four hectares out of twelve are dedicated to green spaces and most notably an orchard that counts 350 trees spread around the villas. Concerning sustainable development, two 700-metre-deep geothermal wells have been set and cover 78% of the production of hot water and heating needed for the whole fort. A pneumatic waste collection system gathers all the rubbish into two spots at the entrance of the fort, thus avoiding trucks within the site. Besides, all the flats located on the ground floor enjoy a private garden. 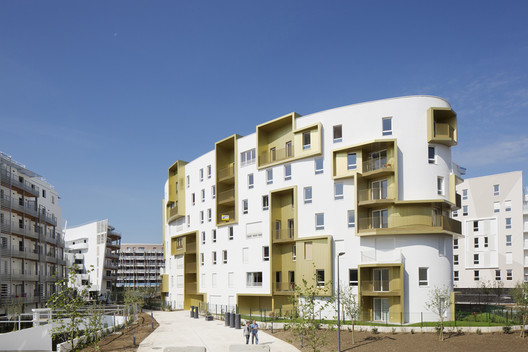