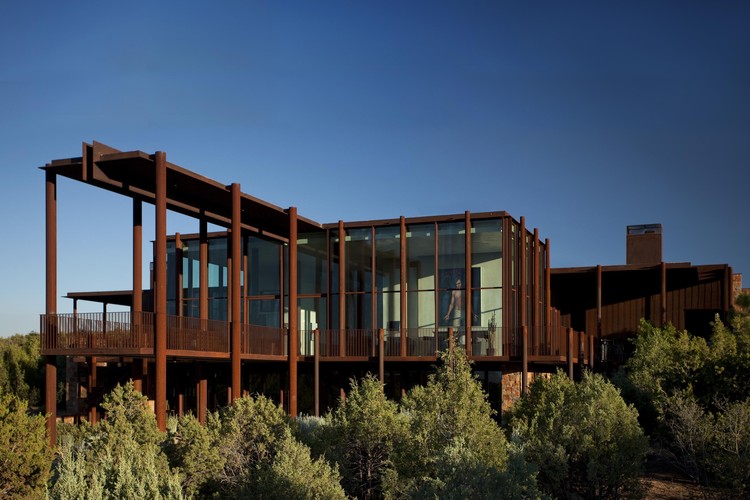 Text description provided by the architects. The site is a compelling 200-acre parcel located north of Santa Fe.  The building is situated on the north slope of a ridgeline, with vistas of the Sangre de Cristo Mountains to the east, the Jemez Mountains and the city of Los Alamos to the west, and San Antonio Peak, near the border of New Mexico and Colorado, to the north.

The search for the historic architectural context of the region led to Northern New Mexico’s Chaco Canyon and particularly Pueblo Bonito, built by the Anasazi between A.D.  1030 and 1079.  The Anasazi left no written language, but the language of their architecture, rock art carvings and sunlight markings still remain.  At Pueblo Bonito, the Anasazi’s built with load-bearing walls which have cores of rough, flat stones covered on both sides with a veneer of friable sandstone spalls. These materials, and the Anasazi’s use of using sunlight as an indicator to mark the seasons by singling out the solstices and equinoxes, was inspiration for the Casa Valle Escondido.

To arrange the sun’s path at noon to fall exactly down the center of the Casa Valle Escondido, the house was precisely located by transit sighting to the North Star Polaris at night and the Sun at solar noon. The baffles at each side of the central skylight allow a beam of light sixteen inches wide to strike the center of the floor at noon.  As the sun moves east to west, the beam narrows to a thin line as it approaches the base of the wall.  No direct sunlight strikes the wall and thus the artwork.

Because natural light is the most desirable for viewing art, along the sides of the art space a system of skylights was developed which reflects diffuse sunlight onto the walls and art.  A full-scale cross-section mockup was built at the site to produce an arrangement that would block direct sunlight, with its damaging ultra violet rays, while at the same time deliver reflected light, optimal  for viewing art, to the wall surfaces.

The building materials, inspired by the historical architecture of the region, were selected to blend into the natural environment.  The masonry bearing wall veneer is “moss rock” or spalled Pecos sandstone, gathered from the base of the north facing slopes of the Sangre De Cristo mountains.  The natural uncut face with lichen growth is set in an uncoursed ledgerock pattern with mortar set behind the stone for a dry-stacked appearance.  The exposed weathering steel structure with round tube columns recalls the ancient pueblo’s use of peeled pine timber as columns. The guard rails of the exterior deck are made of weathering steel grating that becomes nearly transparent against the natural landscape. Walls and ceilings are plaster, tinted to match the limestone flooring. 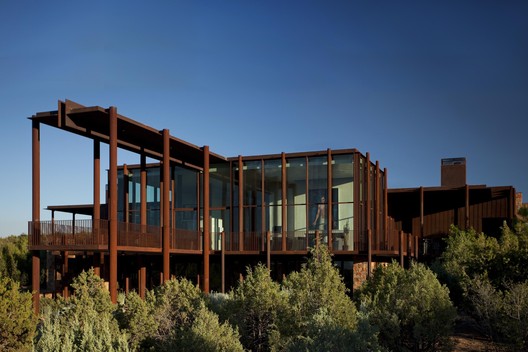