Text description provided by the architects. This project was located in an existing park. Due to the lack of public facilities land, many parks were planned to be multiuse for better efficiency by the increasing of population in Taiwan. We tried to combine a friendly environment with a fire station, and at the same time, reduce the impact for the existing open space.

Before the construction of fire station, the site was originally planned to be designed as a park,but actually worked not very well and there was an existing small public open space aside. The original landscape of the site was mainly a 10-meter-high slope, with an existing temple in the north. The main design issue was to coordinate both the existing slope and temple as a complete plan and at the same time keep a good front view for the temple

According to the regulations of Multi-use for Public Facilities Land in Urban Planning Area, the max building height could only be 7 meters, and this condition made the fire station inevitably to be a long building with low height and a big roof. First of all, we tried to minimum the building height of the fire station to reduce the impact for the existing park, and show the respect to the temple in the north by keeping it's field of view. Second, we tried to make the big roof green as a friendly public open space for the citizens, which connects to the existing park and achieves the goal of a green-sustainable-Architecture.

The thin green roof can lighten the loading of the roof and the water reservoir plate works as the inter-layer between substrate and roof deck to prevent typical water problem of green roof. Scattered on the roof, the white tube sky windows which connect the parking area and the roof top, play the role of lighting system, offer desirable day-light for parking area and night-lighting for the roof top.

The inevitably long layout also cause the inconvenience for the firefighters to set off.We divided the fire station as two volumes and connecting by the bridge goes through the parking area  with an sliding pole to save the time for the missions.

The semi-outdoor space not only provide the staff to coordinate the vehicles easily but also delivers an interactive atmosphere and becomes a good public area for the staff. In order to reduce the volume of the building, staion office was designed in the basement, trying to create an quiet and green court-yard, the B1 patio open space which connected to ground level with the round outdoor stair offers good natural light and ventilation for working space.The interior space is mainly in white and try to respond to purple which represents the TYFB color system.

The form corresponds to the topography of the linear park besides the building, trying to extend the greenery of the area. After serious studies of different elevation strategies, we finally made the concrete Sto and tile as the main facade materials.The composition of various finishing materials and random openings create an interesting and intimate atmosphere for the fire station. The sculpture,represented the concept of the fire fighters, in front of the station, enriches the space as well.

After the construction was completed, the whole fire station is merged into the park, and found a mutually beneficial solution for the coexistence of park and public facilities. 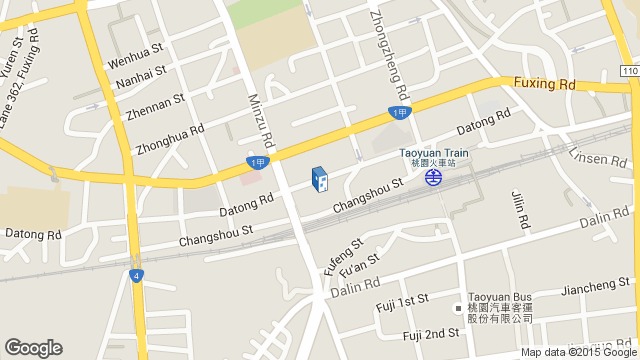