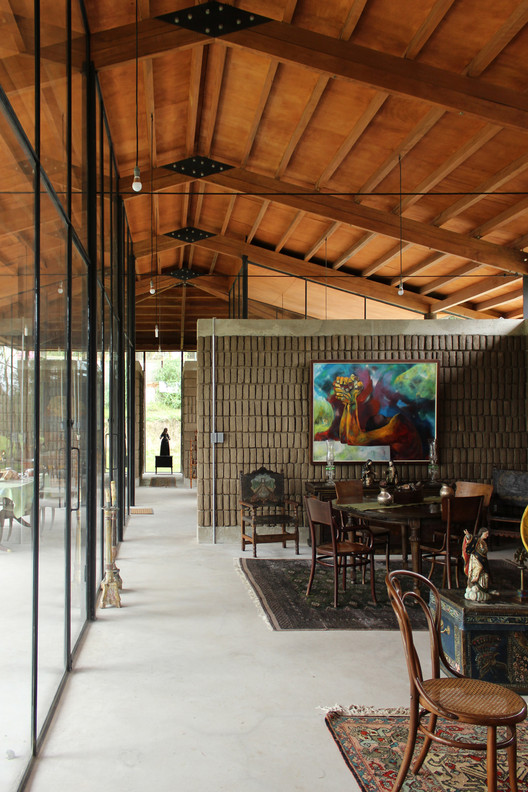 Text description provided by the architects. The project began when a matrimony decided to settle in the countryside. In a little house of bamboo and masonry upon the terrain, their habitants were determined to build their dreams. this marriage, who eagerly decided to renounce to most of their furniture, stuff and life style, moved here. Soon, their own needs that used to fill their vital spaces began to exceed the illusion to explore nature. At this moment, we were required to interpret the problem.

We decided to create the simplest possible shape that, by solving the architectonic requirements, would coexist without confounding with the element already built. The volume is oriented to the sunrise, where the views are directed towards an inspiring distance. This disposition is perpendicular to the built element, allowing us a delicate relationship between the two edifications, almost without touching, but always watching each other.

The house had to showcase the work of the master painter Eduardo Kingman. Therefore, the need to create a gallery became essential. We generate an enveloping that by solving the architectonic requirements would become a natural canvas.

The ground in the region is cangahua (sedimentary volcanic rock), which presupposes stable foundations and plenty of economical clay. In the vicinity of the site, an infinity of small brick factories are seen. Here, the bricks are stacked so that they don’t become deformed and for ease of transport to the oven. This image of the unfinished material, so powerful and so magical due to the impossibility of its retention, become the walls of the gallery.

The clay masonry meant the creation of boxes. These folded walls contain the architectonic requirements. The preexisting volume is rehabilitated from within to house a bedroom and the most intimate areas of the dwelling. Then, the new volume shelters the social areas: to cook, eat, rest. In this way, the clay folds turn into constant showcases for the gallery and the interior, and the glass folds become showcases for the surroundings and the exterior.

The brick workers tell: land work, good boots and good hat. So, we had to resolve the wall from the foundation up to the roof. Over a reinforced concrete plinth the clay is isolated from the ground. This element houses the required electric and hydraulic installations, avoiding their passage through the adobe.

The problem with rowlock brick positioning is the lack of bondage. To resolve this, we think up a reinforcement system for the edges and wall ends that consisted of grouping the adobes into {ashlars} and confining them within metallic platens.

Having finished the edges and ends, the wall is completed row by row by placing horizontal steel ribs attached to the platens of the ashlars. The wall is connected vertically with steel cables that join the plinth with the coronation of the wall. Finally, the bricks are covered with resin to protect them from becoming detached.

The walls had to be resolved,  the pillars being recycled tubes of the oil pipeline were less  expensive, and the metallic outlines  had to be calculated. In any case, the technique, fundamental tool of our trade, permitted us to achieve our main goal: to create the atmosphere of a space produced as light bathes the clay walls.