A design team led by Carlos Marín and José Muñoz-Villers has claimed first prize in Mexico City’s "La Merced" competition for their masterplan proposal to re-conceive the popular marketplace, Plaza Central La Merced. The team’s design, which beat out about 100 other entries, proposed the realization of a new public square to centralize pedestrian activity and to anchor strategies for urban revitalization, such as the reclamation of local heritage sites, the careful manipulation of natural elements, and the installation of urban furniture as a means for placemaking.

The competition requisitioned conceptual resolutions in five specific categories: (1) Sustainable design; (2) The rehabilitation of the public market with urban furniture; (3) The strengthening of the cultural value of the proposed site; (4) The increased efficiency of accessibility and connectivity in the area; (5) The reorganization of the urban context for development potential.

The winning design's proposed public square aims to centralize the identity of La Merced, while introducing new urban programs that would increase opportunities for local residents. If built, the upper level of the present marketplace would be retrofitted with community facilities for the merchant families and residents and a new program would be conceived: the "National Gastronomic Centre," whose traditional Mexican cuisine would serve as "an opportunity for economic development and tourism." In addition to this, the square would act as a "meeting point and shelter in case of contingencies or natural disasters ensuring the safety of 200,000 people who visit the area on a daily basis."

The proposal also adapts the historic and underutilized spaces located around the central marketplace to a spectrum of community needs, including housing, mobility, community development, retail, sports, culture, and entertainment. These places, identified as "R3," have the potential “to be rehabilitated, revitalized, and re-evaluated.”

Street furniture, a project highlight, was conceived to create a "brand image" for Mexico City. Figural, dark stone benches and street lights defer to pre-Hispanic motifs and a commemorative series of fire hydrants reminds residents of the risks of fire, which have previously afflicted the area. Green elements and landscaping would also be integrated as part of the square's image to direct pedestrian flow, establish landmarks and provide space for communal gardening.

The proposed connection between the infrastructure of La Merced and the complex urban tissues of Mexico City would culminate in the creation of a Multimodal Transport Center [CETRAM] to "improve transport and increase trade opportunities.”

Selected competition proposals will be published by the Mexico City Department of Economic Development and shared with the community in a forthcoming public exhibition. 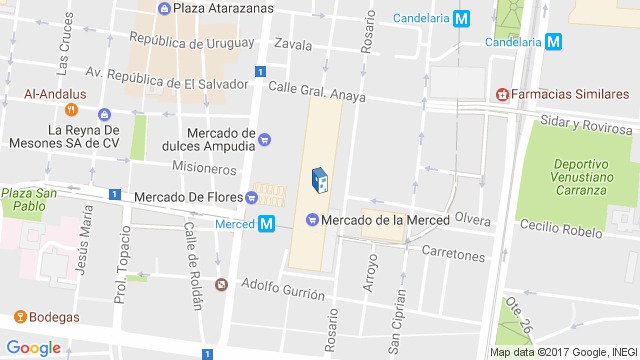