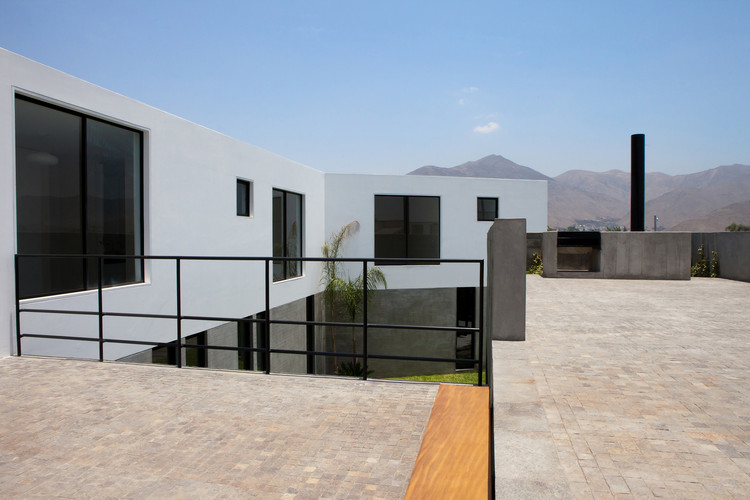 Text description provided by the architects. Located In the city of Lima in a residential neighborhood, with regular pieces of land of 500 square meters each, with constructions that follow basic parameters and occupy most part of the land. The Surrounded House emerges after a series of requirements from the client and a space experimentation from 2.8x arquitectos.

The perception of spaciousness, brightness, transparency and space possession were some of the issues suggested by the client. A house that would function on its own, where the social area would have certain independence from the private area.

The feeling that your piece of land duplicates its size taking advantage of its position on a corner. If we add the architects´ intention of generating flexible spaces and using the landscape as part of the design, the result is visible. They created a 360- degree interior landscape starting at the first level of the social area (living room, dining room and study) and used in their favor the existent exterior landscape, composed by hills and green areas, starting at the second level of the social volume (terrace). The architects decided to use the roof (fifth façade), which is commonly set aside in Lima, to build a pool and create a BBQ area.

This way, the project is born with two different and separated volumes joined by a bridge which at the same time generates a ceiling for a connecting space. The first volume is transparent, surrounded by a garden and a water mirror that goes over almost the whole length of the land.

On the other hand, the second volume of two floors is much more hermetic. It has the employees´ area on the first level and the private area on the second. This second volume has an “L” shape to protect the transparent volume from the sun, to eliminate non desired visuals from other neighboring buildings and to strengthen the project – corner relationship.

The proposal considered generating a good relationship between the building and the neighborhood. For that reason, the architects decided to move back the project and leave a free corner that gives more power to the entrance. In the same way, they decided to prolong the water mirror up to the street and raise the perimeter wall, as a floating wall, so the pedestrians can have contact with the water.