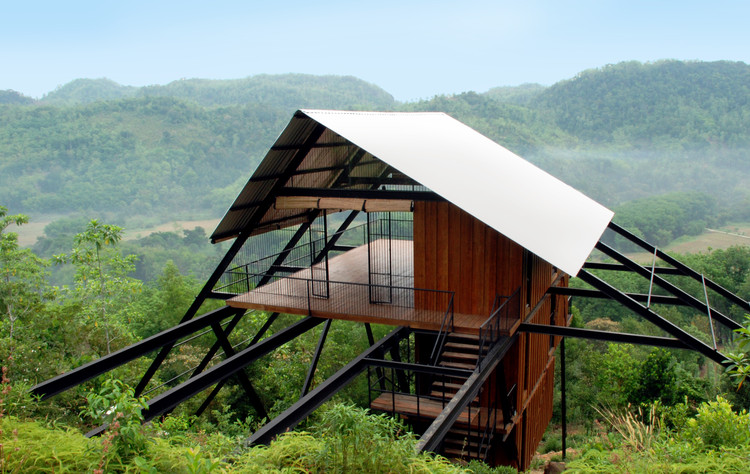 Text description provided by the architects. The bungalow sits almost on top of the raised terrain of a 17 ha estate, where the rubber plantation stops and the jungle begins. It’s selected and elevated sitting allows an undisturbed view of the estate, the valley below and the hills beyond, a view that is always in flux with the changing seasons and the cycle of the paddy cultivation.

The bungalow serves to be a place where the client, a young entrepreneur, can oversee the functioning of the estate periodically and also as a get‐away for him, his family and friends. The client also wanted the flexibility to be able to rent out the bungalow to accommodate a clientele seeking to escape the busy life of the city, a place that would allow quiet rest.

The brief of this compact 120m2 bungalow was formulated primarily to cater to this factor of ‘rest’ and thus included only three bedrooms with attached baths and multi‐functional space with a pantry. Service personnel and ancillary spaces needed for the running of the bungalow and the estate were housed in existing buildings downhill, hidden by the tree canopy, allowing the occupier to completely disconnect from all daily routines and yet be provided with all his needs. The levels are linked using an almost external stairway, such that the bedrooms can be afforded the maximum privacy envisioned.

The form of the building is inspired by the modest “Chena Watch‐Hut”. A Chena or Shifting Cultivation that usually uses a slash‐and‐burn strategy is a common agricultural method seen in rural Sri Lanka. A watch‐hut is adopted as an elevated refuge for the farmer to protect the cultivation overnight.

The inspired form draws on the generic elements of the watch‐hut that encompasses a ‘Simple Form’, that is ‘Elevated’, ‘Protected’, yet ‘Connected’, allows ‘Maximum vantage’, has a ‘Single Entry’, could be ‘Dismantled’, ‘Re‐usable’ and primarily ‘Touches the Earth Lightly’. The solution adopts primarily an elevated deck extending off the hill, a fungible space that encompasses all living and functional aspects needed with the private areas tucked into a compact timber clad box. The simple asymmetric roof, skewed, its structure extending, touching the earth creates a certain imbalance, temporariness to the whole.

The structural concept adopts the whole as an element placed on the hillside, rather than one that is embedded into it. The steel supports are the extended lines of the form itself, touching the naturally undulating ground at varying heights in the landscape.

The materials used are limited to steel, timber and bamboo tats attempting to keep the lines thin as possible imbuing it with a sense of ‘flimsiness’, keeping intervention on-site minimal, letting the natural ground, the vegetation, the run‐off of water to flow inhibited.

The bedrooms are timber clad using the board and board technique of wall cladding, imbuing a certain texture inside and out, and easing the solidity of the box, yet creating a protective envelope for the occupant. The east-facing façades of the bedrooms are left unclad, allowing maximum views. 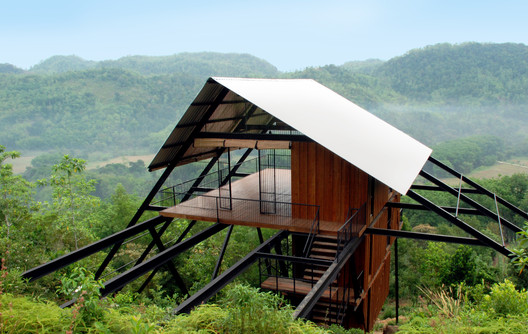