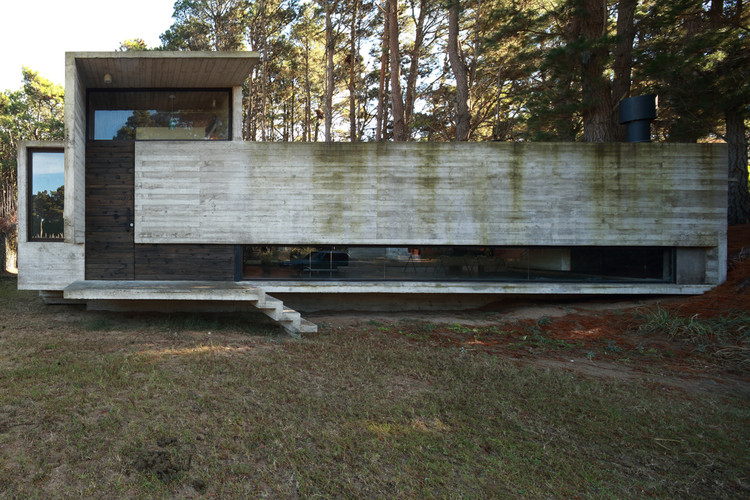 It is a small-scale terrain on a corner located in the forest of Mar Azul, whose particularities are: its small size, the concentration of forestry (pine trees of great size) at the near end of the corner and an abrupt difference between this sector level (the highest of the lot) and the opposite end of 2.50 meters. Another important fact is that only the longest side of the lot has access to street level, facing a sector without trees and abundant pastures so that on this front the lot is too exposed to the street view.

The order of commissioners (a married couple with an older child) was a two bedroom house which did not exceed 100m2, designed to be used primarily in the summer and occasionally during the year. It must have two bedrooms, two baths with minimum measures and a common use space (with integrated kitchen) as generous as possible. Was particularly emphasized the need of important outdoors expansions. It was also required a deposit for saving various beach items.

It is certainly the peculiarity of lot which gives singularity to this home.

The topography and the quantity, quality and location of the trees have been defining issues of the two key project decisions: first, locating the house trying to preserve the totality of the existing trees, and therefore parallel to the longer side reachable from one of the streets and, second, to elevate the social area and access to the house regarding the street to achieve privacy and to better relate with the highest point of the lot. As a result of these decisions seemed appropriate to solve the bedrooms on two floors, each about half level of the social area and located perpendicular to it. The house is thus defined by two volumes, each embedded and forming an L, which encloses expansions at different levels. This way, all the rooms in contact with the ground are prolonged to the outside by decks at different heights related to each other with a concrete outdoor staircase.

You access the main level of the house saving a slope through a concrete staircase. Once crossed the front door, and from a small entrance hall, you see two sections of stairs leading, half level above, to one of the bedrooms and a shared bathroom and, half level down and half buried in the dune, the main bedroom with an area to be used as a desk and a bathroom, also shared. From this room you get out to a courtyard and ascend via a stairway to the expansion of the main floor and, from there, to the most elevated and wooded area of the lot. The social area of the house is frankly open to this expansion and with views through the kitchen sector into the woods, while remains protected from the street views by a low opening along the entire front.

The house is constructed of three basic materials: exposed concrete, glass, enclosure beams and pine wood in the outdoor decks.

The slabs of the different volumes are supported by walls and exposed concrete reversed beams, and are finished with a minimum slope in order to produce a faster rainwater runoff. It was used the same concrete of the other works in Mar Azul (H21 with fluidizer) a mixture with low amount of water that when forge create a more compact concrete. The few hollow brick internal partitions are plastered and painted and the floors are of concrete screed cloths divided by plates of aluminum. The openings are of dark bronze anodized aluminum. The heating system, since there is no natural gas in the area, is solved by combining salamander, bottled gas stoves and electric stoves.

Except the queen size bed, the armchairs and chairs, the other equipment of this house is solved in concrete. Even the secondary bedroom beds are perforated cantilever slabs.