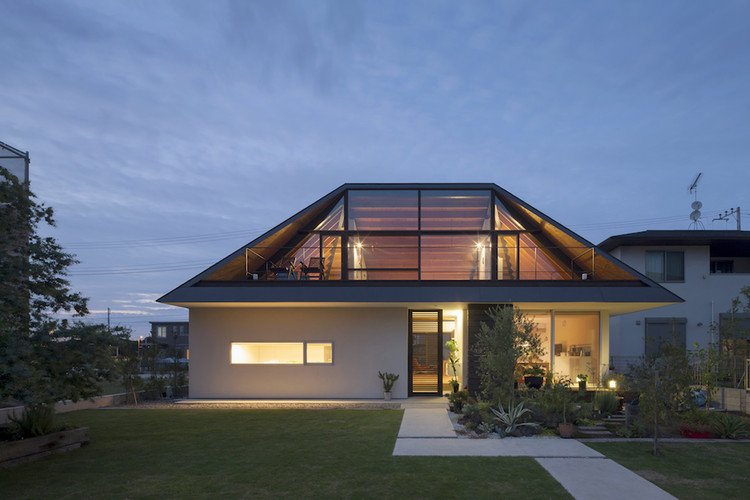 Text description provided by the architects. This is a house for a family of four, situated on one of the lots for sale at a newly developed area in "satoyama" or semi-natural woodlands. The land is too large for a simple program requested by the client: a private house with a garage for two cars.

Taking advantage of the large site area, we proposed a spacious one-story house that is open to the surrounding neighborhood, based on a design concept of "connecting space to nature". The site faces two streets on the south and the north sides and no fences are installed along the both borders. The front yards on the both sides visually serve as pubic park although they are not accessible by non-residents.

The house consists of an open square plan intersected by living room in the middle, and master bedroom, bathroom, dining/kitchen and closet are located along both outer zones. The living room space extends horizontally via the "engawa" (or veranda-like intermediate space located between the interior and the exterior) towards outside. The living space, which can be freely subdivided as necessary by sliding doors, provides both an appropriate degree of privacy and a feeling of togetherness simultaneously as same as traditional Japanese houses.

The section resembles that of a traditional folk house, which is composed of a one-story living space with attic space covered by a large hipped roof. The entire south side of the hipped roof is a large sky window, where one can enjoy beautiful views of the sky. On the north side, one can enjoy views of the trees and sunlight in the garden under the low eaves.

The large hipped roof, which is the main design feature, is constructed of wooden roof girders and rafters to support the simple and symbolic form.

The large roof may be designed as homage to a mountain in the natural landscape that was lost during the development process. However, we expect that this house will give a good inspiration in creating a better community, by proposing a comfortable living environment where people and nature co-exist to make a comfortable life under a large roof. 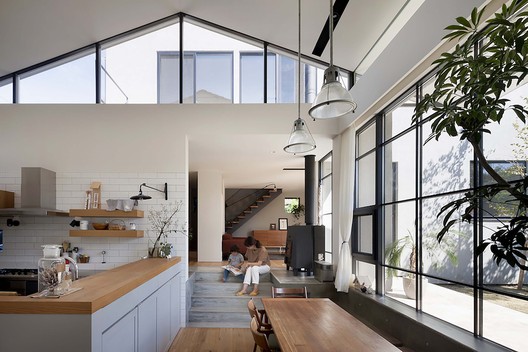