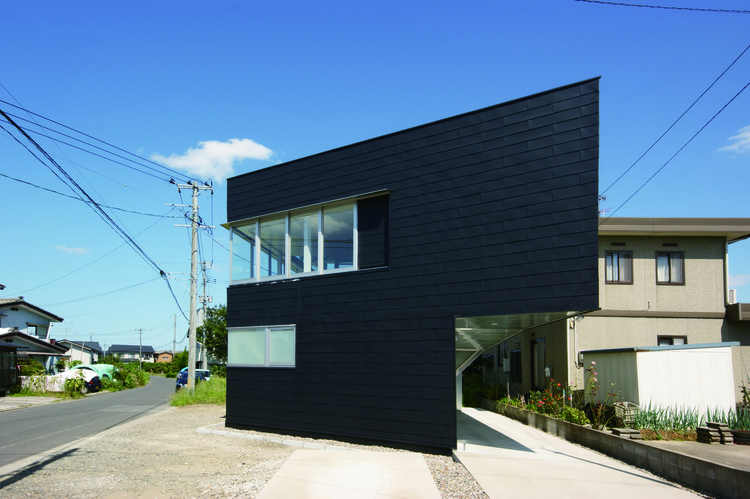 House located on the west edge of the plains. In this district, Mt. Yahiko and Mt. Kakuda are above sea level at about 600m as regional landmarks stand between these plains and the Sea of Japan.

The client's hope for the house was that from the window, he would be able to see two mountains that he used to see in his childhood.

However, according to the investigation before designing, we found that even at the second floor level, they could not see Mt. Kakuda due to obstructions from the other house, only Mt. Yahiko. There was a possibility of the view of Mt. Yahiko disappearing as well when if a new house was constructed between the house and the mountain in the future.

Although two mountains' view from the house will disappear, these elements still keep the important identity for this site and their existence that suggests the wider world beyond the narrow space of the site. Thus, I designed this house as a compass that always considered the existence of two mountains while living.

Those are the orthogonal sides that are ambiguous rather than the accurate orthogonal sides. Because, if they stand at a position away from the center, it shifts from the accurate axis. If the change in the future is assumed, the large windows change from showcasing the "Scenery of the mountain" to "Hint of the mountain" as the prototype in the region that keeps existing without greatly changing even if the surroundings are changed.

And, herein, the two mountains intersect as well.

The second floor is a space that opens radially toward two orthogonal sides.

The wall and furniture are radially arranged, and the ceiling has an upward inclination from the inner toward the window. According to the reverse-perspective, the depth of the second floor was shortened and they feel the outer environment closer. It makes more conscious of the orthogonal side and "Hint of the mountain" .

Two orthogonal sides with obtuse angle generated the effect that the interior entered in the outer environment. At the same time, according to thrusting out to the town with the obtuse angle, this architecture considered becoming a small landmark for an average town that was lack of the vigor.