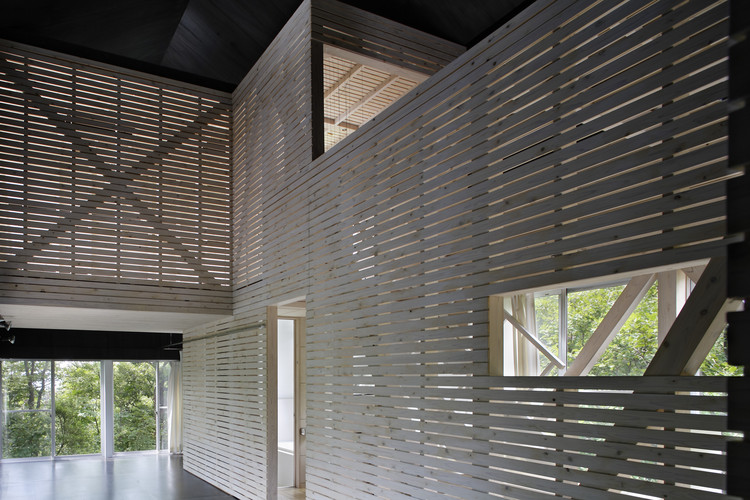 Text description provided by the architects. A low-cost public cottage for locals and visitors, located within a beech woods park, within a region with the heaviest snowfall in Japan, often as deep as 4m. It was an architecture in that two volumes were combined.

One, outward form Big Box. It was determined as the maximum volume possible from the budget with local details for withstanding heavy snow without maintenance in the winter, when the cottage becomes isolated. The big volume also enables comfortable stay in the summer. The other is named Tube. There the essential functions for habitation were placed in a row.Tube is complicatedly bent by the restriction of Big Box, and Big Box is cut irregularly by the bent Tube. The gap between both generates an unexpected space.

The contrast of colors or activities between both offer different vantages for seeing the woods.The exterior gives similar impression to the local houses, which the people are used to seeing. So, they aren't conscious of it: a consideration to the fact that the site is within a park.

At the same time, it is not the same but delicately different in the degree that they cannot recognize its difference when they observe in detail. It is an attitude for designing the new architecture in the region with mature context. Stepping to the interior, the impression changes. A new contrast arises between the familiar exterior and the unexpected interior, adding to the contrast between Big Box and Tube.