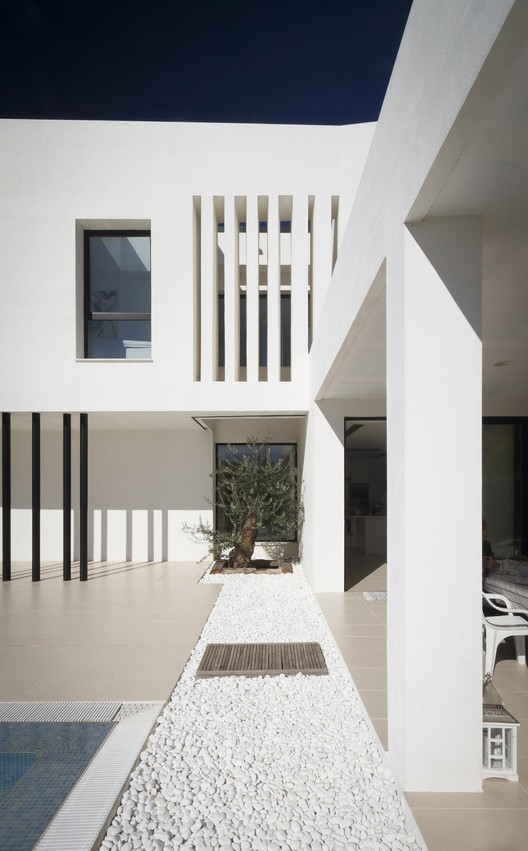 The result is born from the clear ideas that the owners had formed for their home. This is a young no-kid couple who demanded open spaces, to develop their own living, but keeping each an own little place. They were looking for very bright interiors, although with some control of the sun in the hotter months, and directly communicated with the outside area, to extend the home for the long periods that the weather allows in this latitude.

The office translated the demands of the owners to the project, watching the construction systems and studying the factors that affect various aspects of the process, taking advantage of building orientation and scale of the piece of land, developing a set of clear clean volumes in response to different spaces the program established .

The owners like arrange meetings, parties and other events with friends and family, so the house is arranged on two levels, the main one, an almost unique space and very open to the outside, and the upper level, more exclusive and intimate, enhancing the value on the communication between them along the shared common volume. Both levels have a distinct compositional response in the elevations, the upper level as a broken but continuous body, leaning on the lower boxes that respond to the different uses of the main level. This lower level is composed by those containers each housing a different use, separated by axis of physical and visual communication between the two strips of ground.

These lines score references between inside and outside, the built and the natural. The fact that owners keep a constant presence during the work, caused somechanges in the project to get a final result even more in line with the ideas they’ve held from the beginning, as well as new ones that arise during building p!rocess.