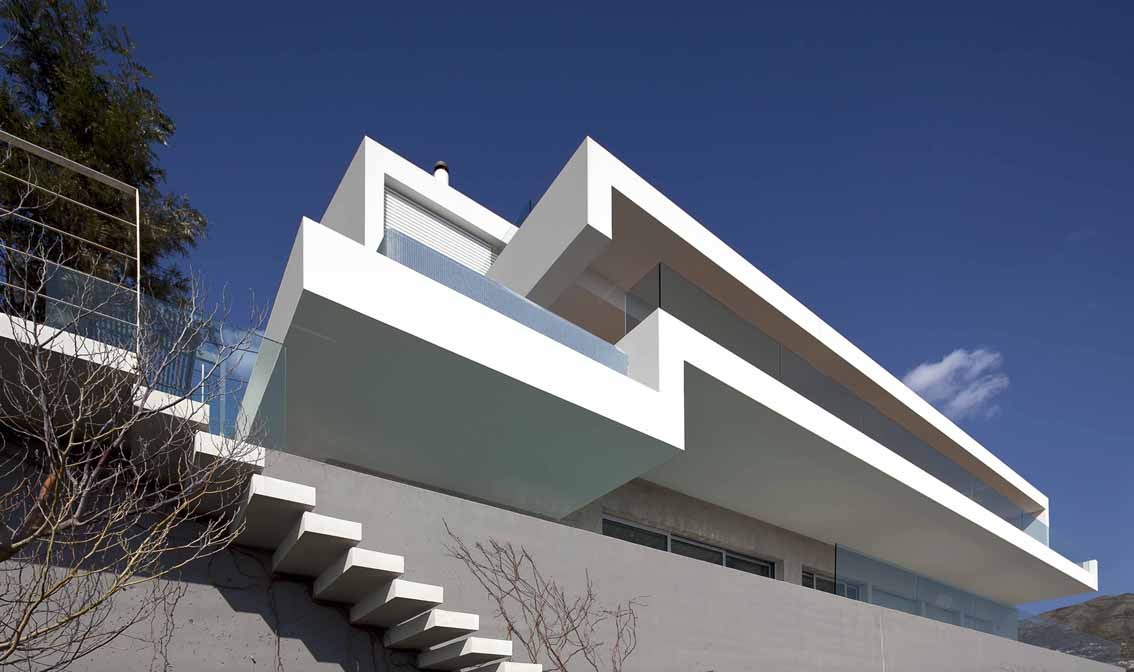 This single family house is located in Voula, Athens, up on the hill, in a site with extremely steep terrain. The access from the street is at the site’s highest point, which provides with a limitless view to the sea.

The pitch of the site, as well as the view, have both been the main factors to determine the design choices made. Because of its steepness/gradient, the house is barely visible from the street.

The access point is at the third and highest level of the building, from where the user descends to the middle level with all the living spaces. The linear organization of the plan, with the rooms laid out successively and perpendicularly to the court, has allowed for unobstructed views from all spaces.

At the highest level, except from the main entrance, one finds the bedrooms of the family which all have access to roof terrace. The middle level includes the dining room, the living room and the kitchen. They linearly spread out either into the great balcony to the front or to an outdoor space with the element of water at the side. At the lower level the guest rooms and play rooms can also function as a separate apartment with the panoramic view always remaining unobstructed.

The exterior of the building express the linearity of the functional organization and the view-oriented design of the spaces. Therefore, the shape is characterized by a fold with horizontal elements which start from the pool at the living room level and unravel until they meet the bedrooms floor, at the top. The prominent volumes allow for the house and the steep terrain to blend in harmony.

The materials chosen enhance the noble appearance of these volumes.  The retaining walls are made of exposed concrete and they juxtapose other building elements which are white plaster finish. Inside, wood is used as the main floor surface and white finish on all walls.