KSP Jürgen Engel Architekten International has been awarded first prize for their proposal of a new "urban helix" in Changsha, China, that extends public space from the city center into Lake Meixi. The concept serves as a catalyst, marking a termination point on a new street axis that culminates into a pedestrian ramp symbolically spiraling 30 meters above a 20,000 square meter artificial island.

The helix structure was conceived as a new landmark for Chansgha, affording visitors a unique vantage point of the city's busy Central Business District and the surrounding lake. In total, the public spiral is 88 meters in diameter and runs one kilometer in length, hosting a range of different programs from hospitality facilities to extensive public gardens, sun decks to children play areas.

Structurally, the curved ramps are made of hollow steal-beams which rest on 40 centimeter thick columns, allowing walkways to lift 9 meters off the ground, bridging across two expressways and reconnecting the city to the water.

Considered as a "city built from scratch," Changsha has been host to a slew of architectural and urbanist projects in recent years. From Zaha Hadid's ambitious Culture and Arts Centre to KPF's 120 million square foot master plan, the city has been an experimental hot bed, expecting to grow to 180,000 inhabitants within the coming years.

The Meixi Urban Helix is due to be completed in 2015, "marking the start of a new urban expansion in the southwest of Changsha," says KSP Managing Director Johannes Reinsch. 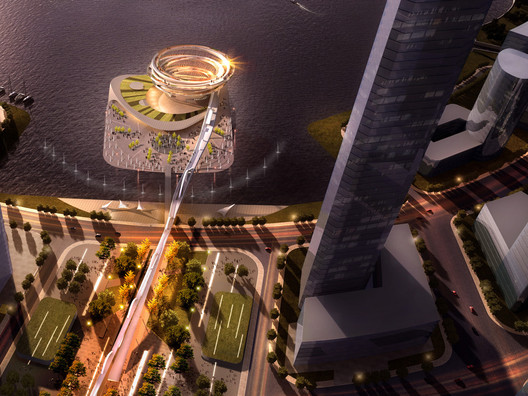