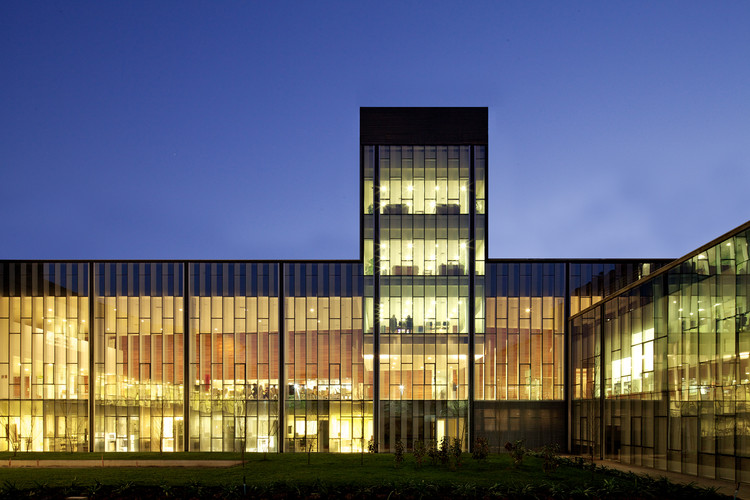 The design sought to focus the clinic program in the existing volume and layout two new volumes with the public program in the northern and southern boundaries of the site. The north volume faces the Alameda, it is 6 storeys high and contains the administrative and consultation area, while the southern volume is 3 storeys high and houses the rehabilitation program. These two new volumes are connected to the existing building through a fourth volume that constitutes the public, double height hall, which organizes the distribution around an inner courtyard.

The site is located on the south side of Alameda, taking advantage of the Mutual site to strengthen its corporate image. This operation is performed by arranging the main volume of the six-story expansion parallel to the Alameda, building a facade 98 meters long and 27 meters high. Thus, the new Mutual Clinic joins the tradition of other projects that take advantage of the presence of this avenue, an orienting axis in Santiago. Thus, the effort was concentrated in defining the proportions of the facade with the classical definition of a base, development and crowning. The base was developed as a staircase 60 m wide by 2.8 meters high, and a facade clad in precast concrete. The development is defined by a curtain wall modulated at 1/10 of the span of the structure, and a screen-print at 1/ 20 of the same distance to control outside views regarding the medical program. The top is defined by a slender metal roof.

The design of the structure faced the problem of solving a highly specialized program that requires lots of facilities, and also the project as an extension which must meet and match the levels and the continuity of the corridors. Such points were resolved considering a structure of pillars and capitals spaced at 7.5 m, and post-tensioned slabs in order to facilitate the layout of facilities and changes in the distribution of rooms.

Two other problems were the main design focus: on the one hand it is a highly specialized program (ICU kinesiology wards, etc.) with lots of facilities, and on the other hand it is an expansion, where besides expecting the coexistence of the building construction with the operation of the clinic, there are given standards with respect to the levels, edges, as well as the continuity of corridors. Such points were resolved considering a frame structure consisting of pillars and capitals spaced at 7.5 m, post-tensioned slabs in order to facilitate the layout of facilities and changes in the distribution of rooms.

Its layout is defined by two volumes: one horizontal 120 meters long and 8 storeys high containing clinical programs, and one vertical 20 soreys high housing the consultation program. These volumes are connected by a double height lobby that traverses the clinical volume and distributes towards the different services.

The location of these volumes on the site involves two operations:

The first operation is to set up the clinic as an urban landmark in the context of Central Station, via the location of the 20-storey tower facing the Alameda in conjunction with a public access plaza at an urban scale.

The second operation is the orientation of the horizontal building perpendicular to the Alameda, with its hall traversing the longitudinal extent of the site from the access plaza, dividing the area of ​​clinical services located on the east side, from the public park located to the west.

There are a total of 62,600 m2 in the first stage (90,000 m2 in the second-stage) and 208 beds, including critical areas (ICU, Coronary ICU), 16 operating rooms (General and Ob-Gyn), 40 consultation boxes for medical specialties (Consultations Tower), 28 rooms for diagnostic and therapeutic procedures, 16 boxes for adult, pediatric, and ob-gyn emergency services, and support services such as radiology and clinical laboratory.

The development of a clinical building from scratch involves a high degree of freedom that requires proper management and coordination of the structure, facilities and enclosures. From this perspective, we considered a structural design to allow maximum flexibility, opting for a reinforced concrete system that combines vertical cores, post-tensioned slabs, and capitals instead of beams, in order to leave enough room in the ceiling for a flexible layout of networks and facilities.

Due to the size of the project in height and extension which brings together a tower, the clinic building and the volume that connects them, we devided the complex into six structural buildings, where the horizontal volume was divided into 4.

The enclosure and facades of the building took as a starting point, as requested by the client, a fully transparent glass curtain wall envelope. Through a study, we recognized sunlight incidence in the generation of heat within the exposed enclosures, forcing us to rethink the facade through the necessity of having a surface at least 30% opaque. Finally, we devised a design that delivers a 50% transparency through a system combining transparent crystals modules with others containing partitions within the module of the curtain wall, and which display a ceramicized glass on the outside.

The green spaces of the project take into account the pre-existence of the park located west of the site, which occupies 20% of the plot area. During the construction process, some species were maintained. This green space is positioned as an interior park that allows a distance from the adjacent plot, and the creation of a space for rest surrounded by most of the public spaces in the clinic, such as the hall, casino, café, auditorium, and oratory. 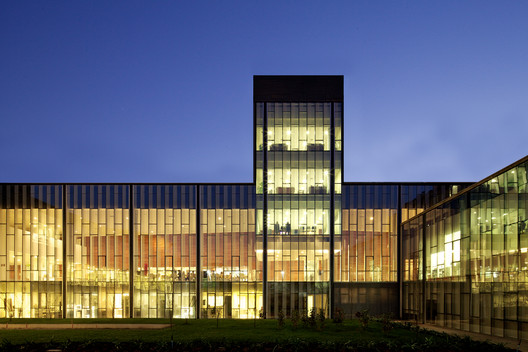