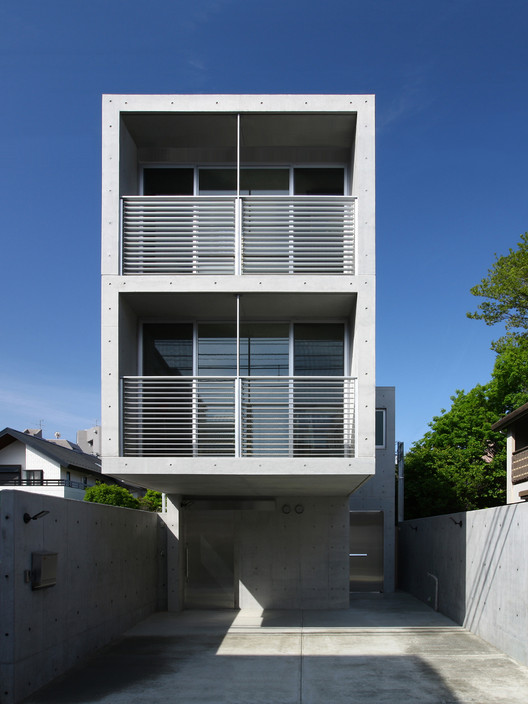 Text description provided by the architects. The house sit on a narrow and long site, while facing a vacant lot too tiny to build the building beyond the road in the front east side, and facing a pedestrian path in the back west side.

In the south long side, buildings like apartments might be built and might cause the lack of the privacy and the natural light of the house in the future, in spite of the good condition the metered parking offers now.

The dwelling units of two generations having the entrances each separate on the ground floor were stacked in the vertical, and the family living areas were placed the west side of the each house facing the tree of the pedestrian path.

In the front road side, a certain distance for a buffer to the passer and neighbors was kept by providing the open space that has full width of the site under the cantilever building.

In order to be able to live comfortably without being affected by the change of the neighbor's situation, main openings were set up in the east and west side in the direction of the long axis of the house, and the terrace covered with glass was suspended in void as an element to incorporate natural light above living area on the upper floor.

The distribution of the brightness and the silhouette of the light shine in the interior space are changing variously throughout the year and the day every moment, in response to the angle of the natural light.