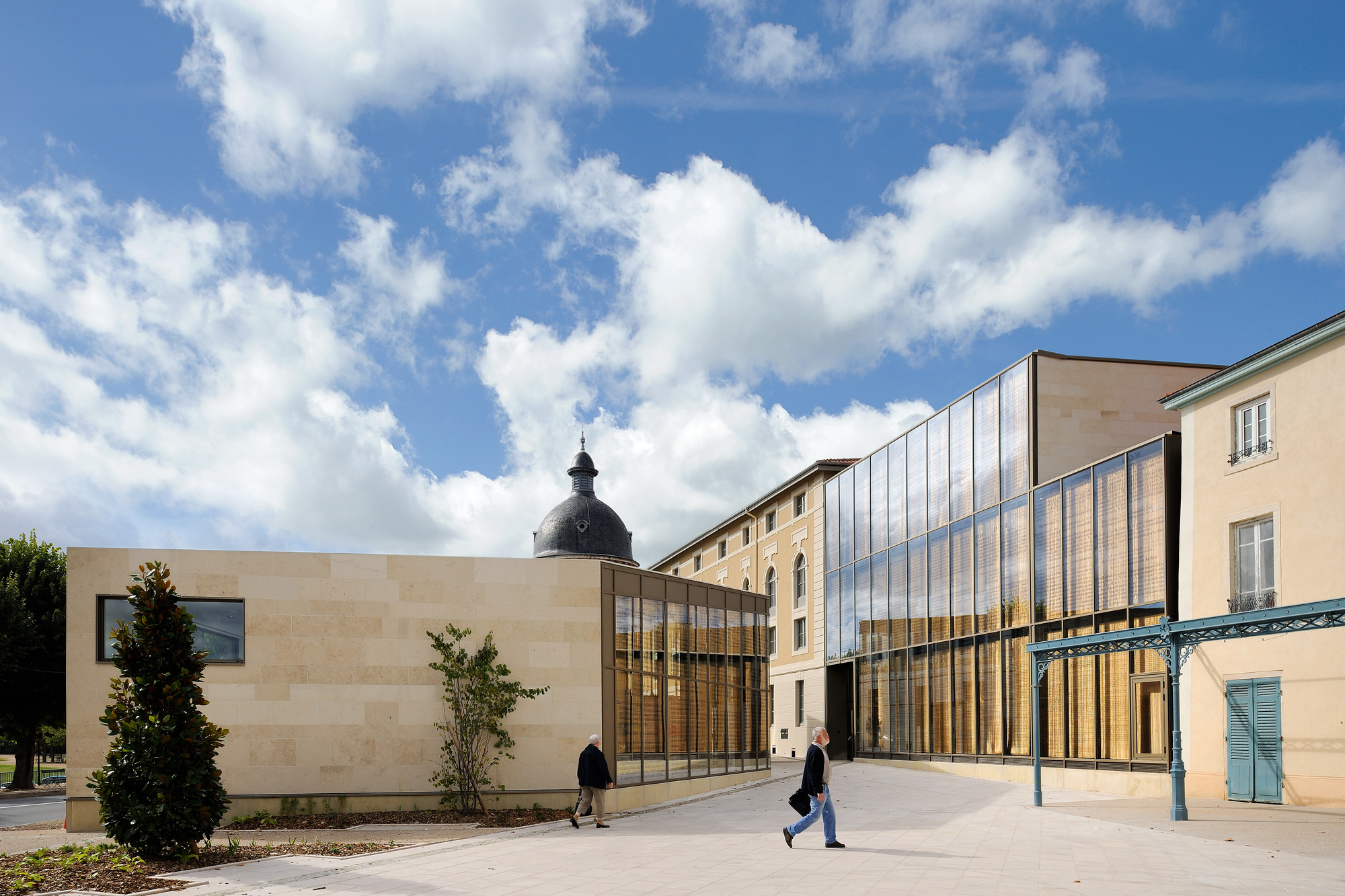 Text description provided by the architects. A stone pebble cut like a diamond, a mineral forecourt that reaches out to draw in passers-by, a glass facade like an ever-changing skyscape, gilded like copper, words from the old French dictionary engraved into the glass panels, illuminated by curtains of woven metal: La Passerelle, a new cultural space for Trévoux, slots into the gap next to the hospital like a missing piece of the puzzle creating a perfect blend of history and contemporary architecture. The programme is inspired by the town’s rich literary and architectural heritage, creating a forum for education, culture and sharing which brings together a music school, a multi-media library, a CIAP (architecture and heritage centre), an old pharmacy, an exhibition hall, and a multi-purpose room fitted out as a cinema. The challenge for the design team was to produce a contemporary facility that would be open to the town and today’s world, on an exceptional site. Through a radical, yet gentle, confrontation this project makes the history of this town on the banks of the river Saone visible for all to see.

Tuning into a place and its history

To fully understand the subtleties of the project you need to take look at the little-known history of Trévoux. The town, located 25 kilometres north of Lyon, played an important role as a regional agricultural storehouse, because of its close proximity to the city of Lugdunum and the river Saone. This role led the town to develop as a port and toll gate. In the 16th century, Trévoux was the capital of the Dombes and as it was not part of the kingdom of France, it had its own parliament and minted its own money. As an independent territory, it welcomed writers and thinkers and authorised the publication of works such as the Trévoux dictionary and journal, and as such became a source of great intellectual effervescence during the age of enlightenment. One of the independent principality’s main attractions was its status as a tax haven. Indeed in Trévoux the gold drawers, who produced the gold and silver wires used by the Lyon-based silk makers, did not have to pay the tax on royal wire drawing. This gave the industry considerable impetus. In 1762 the town became part of France, and although it lost its tax privileges, it preserved this industrial heritage and continued to produce a tool required for the activity: draw plates. Draw plates are plates pierced with conical drawing holes through which metal is drawn to form wires. Over time these draw plates were made with increasingly harder materials: oak, iron, steel, ruby, and sapphire. In 1965, a worker in Trévoux managed to pierce the hardest-wearing material of all: diamond. Trévoux then became the capital of diamond draw plates.This rich history is reflected in the town’s unusually high quality, prolific urban and architectural heritage. The hospital built into the ramparts, the parliament and the church, the castle, the small, steep medieval streets, the footbridge and its extension etc. However, Trévoux’s character has not only been forged by its history, but also owes much to its geographical location. Although the river Saone flows from north to south, Trévoux is located on a large meander which forms both a south-facing beach and a natural port. The site has unusual potential from a landscape perspective thanks to its own visibility and its views of the river. The town is built into the slope at the foot of the Dombes plateau, and follows the site’s topography, revealing its power.

The project forms a continuum between the respectful enhancement of the historical building, and the use of contemporary language in the new facility. From an urban planning perspective the aim is to recreate the alignment of the ramparts to present a continuous front along the banks of the Saone. The demolition of the annexes has allowed the south facade of the hospital to be shown in its best light, re-orientating the building towards the river and opening it out onto the newly-created Place du Pont. The multi-media library fills the space left between the hospital and the renovated hotel. To the north, on the side facing the town, the facade is aligned with the hospital at the edge of the plot, in front of a small paved square. The Ruelle du Cornet, the oldest alley in the town, has been restored and access through to thesmall square re-established. The overall dimensions correspond to those of the hospital and the building connects with the neighbouring houses at their highest point. The flat roofs, visible from above, like all the buildings in Trévoux, are covered in vegetation or with bricks laid edgeways so as to blend in with the colour of the surrounding tiled roofs. Opposite, the Pavillon des Arts, like a stone pebble, re-organises the public space. It frames the new Place du Pont, guides pedestrians with its angled walls, and protects the multi-media library from noise and visual disturbance from the traffic on the quay.

The programme is ambitious, specialised and generous in terms of the facilities included. It combines memory, culture and education and forms a strategic project with a strong commitment from the client. The music school is situated in the south wing of the renovated historical building. This location allows it to operate independently whilst remaining highly visible and benefiting from the nobility and prestige of the building. The multi-media library characterises the whole project with its golden facade that forms a new 21st century rampart. It occupies the east wing of the hospital, and the new section fills the entire space between the two buildings. The Trévoux dictionary is displayed in the middle of the ground floor, at the heart of the building, where it joins the heritage collections. This space adjoins the CIAP and the old pharmacy. This whole section, known as the Carré des Patrimoines [Heritage Square], is connected to the historical town. The old pharmacy formed part of the original hospital. The CIAP is structured around a model of the local area and recounts its history using varied content staged in an engaging and aesthetic format. The Pavillon des Arts is the counterpart to the multi-media library. It contains spaces which are or can be shared, giving an overall coherence to the different programmes. Very closed in on the side facing the quay, but very open on the side facing the square, it houses an exhibition hall that is visible from outside the building, and a multi-purpose room equipped with retractable seating which can be used as a conference hall, theatre, rehearsal room or cinema.

Heritage and modernity are in permanent contact but never clash, and the atmosphere created is calm and serene. The architects chose to adopt clean lines, favouring simple shapes, and a range of materials that is limited but which has been chosen for harmony, intended to acquire patina rather than age. Transparency, clarity and finesse characterise this project which blends memory, context and creation. The architects have absorbed everything that makes up the site and heritage of Trévoux and drawn their inspiration from it: the overall tone of the old, mineral, independent town, the gilt-edges of old books, golden coins, threads of precious metals, the walnut wood of the apothecary cabinets, the quality of the script in the dictionary and the very special light, magnified by the reflections on the river Saone. The response echoes this through the materials chosen for coatings, the stones, the dyed concrete flooring, the pebbles, all in shades of «sand». These components are lifted by the light that catches on the gilding and the interplay of reflections. The same principle guided the choice of yellow through to copper shades for the furniture.

Between opaque and transparent, smooth and rough, thick and thin, the materials that make up the facades have been worked with precision to form a series of skins that characterise the project. The balance between fully transparent and fully opaque is symbolic of the connection between past and present. There is no intention to imitate the site’s heritage, but rather to express it simply and subtly. The transparency comes from the luminous, effervescent glass facades that are the hallmark of this project. The facade of the multi-media library stands face-to-face with that of the Pavillon des Arts. Facing due south, the double glass wall benefits from a solar gain, whilst acting as a thermal filter and service duct. Facing due north, the single-glazed windows create simultaneous echo and mirror effects. Entries from the Trévoux dictionary are screen printed onto the facade, bringing it to life whilst preserving the river views. They are suspended from guide rails and can slide across each other. They are the result of research carried out with the designer Sophie Mallebranche, a specialist in metal weaving. The irregular mesh creates effects which change according to the time of the day and the season. In terms of opacity, several examples stand out. The solidity of the renovated facade of the hospital is emphasised by its proximity to the fragile, glass skin. The aim is to restore its initial clarity and appearance by adopting the original proportions of the floor framework (by recalibrating the bays, raising the aprons, and fitting windows into the attic space) and removing some recently added components. The Pavillon des Arts and the north-facing facade are clad with Massangis stone, a type of limestone whose grey and beige colour blends in both with the hospital and the golden stones of the buildings in the old town. The overall composition of the north-facing facade has been worked so as to emphasise the alignments, string courses, fluting and the proportions of the openings. On the Pavillon des Arts the layout of the smooth stone cladding has been used to accentuate the pebble effect. 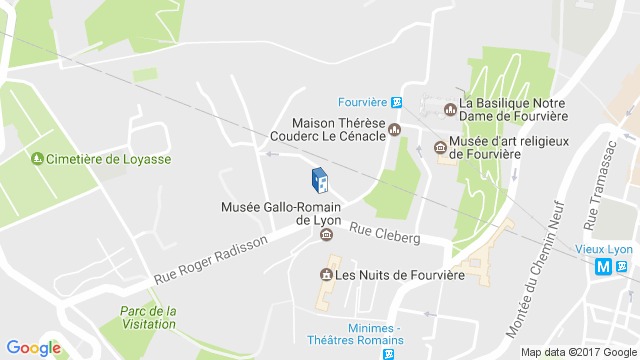