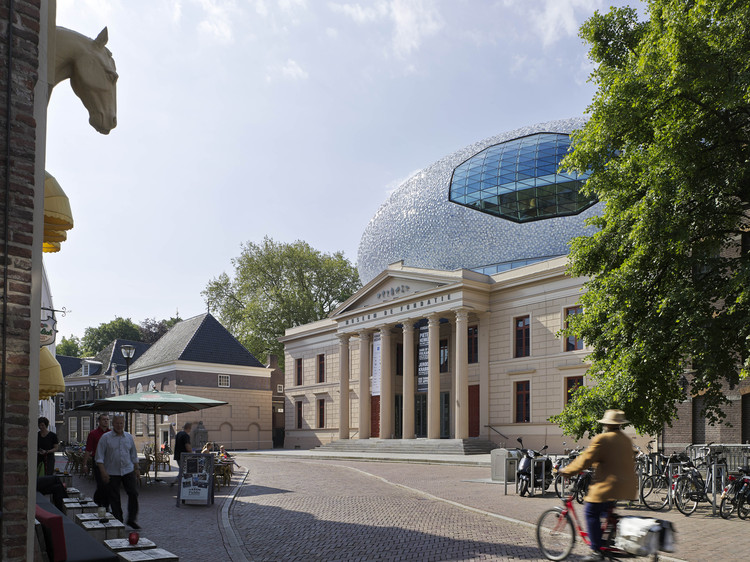 Text description provided by the architects. Museum De Fundatie in Zwolle, situated on the border between the mediaeval city centre and the open 19th century parkland with its canals, has been extended with a spectacular volume on the roof of the former Palace of Justice.

The courthouse on Blijmarkt was designed by the architect Eduard Louis de Coninck in 1938 in the neo-classical style. De Coninck intended this style of architecture to symbolise the unity in the legislation of the new kingdom. The building has a double symmetry with a monumental entrance and a central entrance hall extending over two floors.

On the city side the free-standing building is slightly recessed in relation to the unbroken, mediaeval façade of Blijmarkt. Together with the classical façade structure of a tympanum on Corinthian columns, this gives the building a solitary character. The building is also free-standing on the canal side, in the green zone of Potgietersingel. The canals were laid out as a public park in the English landscape style in the second half of the 19th century, following the demolition of the city walls.

Due to its location the building became a link between two distinct worlds: one an inward-orientated, mediaeval, fortified city with a compact and static character and the other a 19th century park with an outward-orientated, dynamic character.

In 1977 the building ceased to function as a Palace of Justice and it was converted into offices for the Rijksplanologische Dienst, the government planning department. A mezzanine was constructed in the two high court rooms. Since 2005, following internal renovation by architect Gunnar Daan, the building has been the home of Museum De Fundatie.

The museum has an extraordinary collection including works by Rembrandt, Saenredam, Turner, Monet, Rodin, Van Gogh, Mondrian and Van der Leck. In addition, the museum organises modest, but much discussed exhibitions. Under Ralph Keuning’s directorship these temporary exhibitions became so successful that extension of the museum became unavoidable. Despite the inherent problems of extending the palace in the historical city centre, the museum resisted the temptation to abandon this national monument and opted to extend it.

Bierman Henket architecten designed the extension of the former courthouse in 2010. Architect Hubert-Jan Henket succeeded in persuading the client not to add an extension next to the existing building: this would have destroyed its solitary and symmetrical character.  An underground extension proved spatially too complicated. Instead Henket designed an extension with an autonomous volume on top of the monumental building.

In the same way that the Palace of Justice links two worlds in a horizontal direction, Henket couples the classical, static building with the fluid dynamics of a contemporary extension in a vertical direction. The superstructure, just like the substructure, is symmetrical in two directions, but the shape rather resembles a rugby ball. Together, the two totally-different volumes form a new urban entity. There are also two contrasting interpretations in the interior: the classical succession of rectangular museum halls below versus the fluid, open spaces in the elliptical volume above.

Right from the outset, both the Rijksdienst voor Cultureel Erfgoed, the department responsible for the preservation of monuments and historical buildings, and local conservation societies were enthusiastic about the radical concept for the expansion. Under the motto preservation through development the customary debates and public inquiry procedures were considerably shortened. Planning permission was granted in record time.

Straight through the existing building, eight steel columns stand on eight individual foundations. The columns support the new extension – with two exhibition floors that total 1,000 m2. So, structurally and architecturally, the extension is independent of the old building. The extension – also called the Art Cloud – is clad with 55,000 three-dimensional ceramic elements produced by Koninklijke Tichelaar in Makkum. Together, the mixed blue-and-white glazed tiles measuring 20x20 cm and 10x10 cm, form a subtle surface which, depending on the weather, merges into the heavens. On the northern side daylight floods into the two, new exhibition floors through a large, glazed pane in the tiled superstructure. Inside, visitors have a panoramic view of the city.

With the extension, the original central entrance hall has been carried through as an atrium where the two museological worlds converge. A glass lift in the atrium conveys visitors to the various floors. The stairways are located on the outer part of the floors. In the old building they are stately and straight, in the new development they are flowingly curved. A glass passageway runs between the existing building and the extension − where new and old meet.  On the one side visitors look into the atrium and on the other they have a view of the city and the underside of the tiled extension. With its aim of presenting contemporary and old art in one building – Museum De Fundatie now has a new, truly-unique identity. 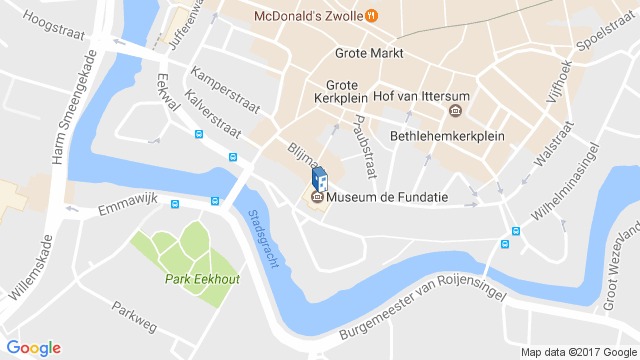 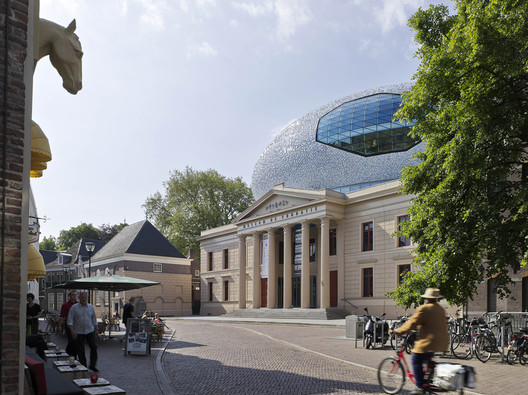