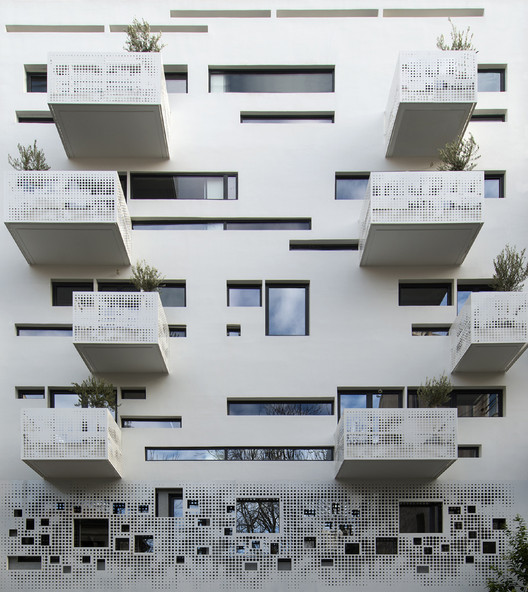 “Urban stripes” is an apartment building or a “polykatoikia” as it is commonly known in Greece this type of building. It is located at Koukaki a neighborhood in the centre of Athens very close to the new museum of Acropolis by Bernard Tschumi and the old beer factory “Fix” by Zenetos an influential Greek architect of the last century. The neighborhood is mostly residential, built during the 60’s and 70’s with the typology of the “polykatoikia”

Reinterpreting elements of this typology and from the two important buildings of the area “Urban stripes” create a new urban façade responding to the urban and social conditions of current times.

Urban stripes were designed when crisis was not evident in Athens and it was finished when crisis is on its peak. Although it was not designed following the trend of a construction bubble era of luxury high end apartments it is not a building of the crisis. It is a rather flexible building that provides solutions for different wallets and needs as it was always the case some decades ago in Athens when “polykatoikia” was an interesting experiment of social mixture and mixture of functions usually following the hierarchy of wealth from bottom to top, distributing office spaces on the first floors, local retail on the ground floor, residential on middle, upper and basement floors.

Apartments are defined through their size, position, plan, section and their view to Acropolis. Urban fabric is being filtered and privacy is important as the dense urban environment is dominant in the area. Using linearity that creates a direct relation to Zenetos building and the balconies of the adjacent building façade is designed through linear openings on different heights that show or hide different pieces of the urban scenery. Juxtaposed to the linearity the cantilevered balconies act as volumes.

Living in the centre of Athens today is dramatically different from when this neighborhood was built back in 1960-1970. Privacy and safety are very important. Controlled views obscuring what you don’t want to see and allowing where you want to see is important as well. Noise and pollution have altered the need of balconies which are essential to the function of an apartment due to the climate of Athens but not to the extent and the dimensions that used to be.

In a grey city like Athens the white color of the façade really stands out but it also helps to the reflection of the intense sunlight during summer. First floor is going to be used for offices and for this reason the façade is different creating a base for the building. Back façade uses different elements of the forgotten back facades of Athens. Using forms of the past like cylindrical stairway, and almost misplaced windows “urban stripes” have a unique modern reinterpretation of the almost arbitrary not really designed back facades of Athens.

Filtering necessary but unwilling views to those totally neglected back facades was one very important task that we had to do. Using colored laminated glasses we proposed a different view to these urban ruins, which suddenly became interesting.

Every floor is different and its apartment answers to different living scenarios and needs. As we get higher Acropolis and Parthenon view is breath taking. After the 5th floor due to regulations we had to recess and so a new building, a penthouse has been created with transparency and vast glass façade to explore a dialogue with the Acropolis rock. The penthouse is made by exposed concrete and glass and is extended in three floors.

Inside, the common spaces are being treated using again elements of the past as mosaic flooring and marble bordures but also it is playful using a palette of colors that differentiate each floor. 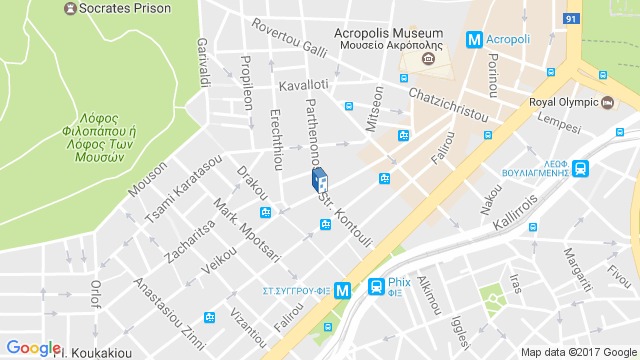