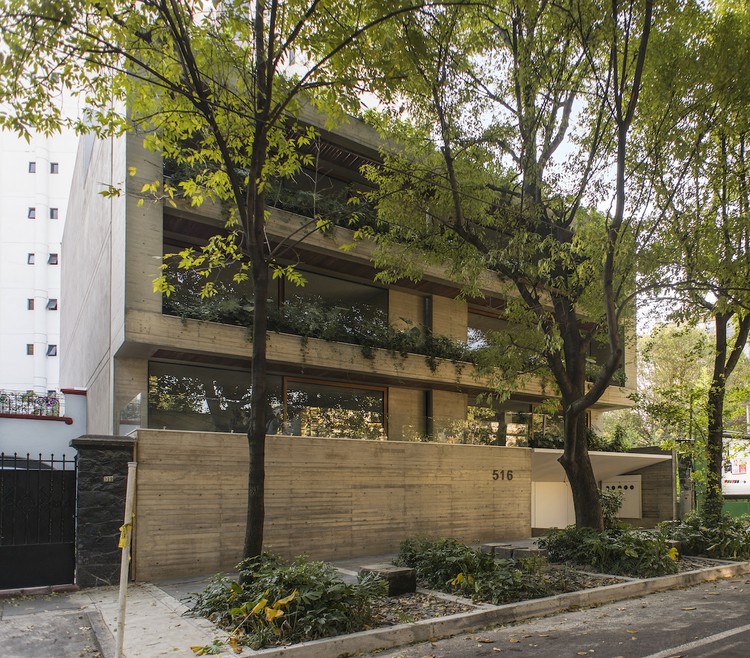 Text description provided by the architects. The value of this plot located in the heart of Polanco in Mexico City, it is the west facade, protected by the big trees aligned with the street.

The concept begins with the idea of the contiunity of the trees through the facade. The architecture, a concrete structure, becomes the trunk.

The project is based in one hand by the density permitted by the urban development code, and on the other hand by the irregular geometry of the plot itself. This last premise dictates the structural design wich consists in concrete structural walls that allow the open spaces fulfill the needs for the apartments as well as the parking level.

The west facade achieves to open the maximum area to the lushed street, expressing an horizontal shape to the interior spaces. The balconies are used as an extension of the interior space, filtering views from the street level with the vegetation buffer across the facade.

The volume is expressed by the main structural material: reinforced concrete. This materializes the real connection between exterior and interior spaces.

The central core of the building is formed by the vertical circulation (stairs and elevator), wich is naturaly iluminated by a glass ceiling and complemented by a central crack that ventilates each floor.

There are 2 kinds of apartments; the first two levels consist in a one-story apartment divided by 2 galleries that clearly separate the social and service area with the private spaces (rooms and tv room). The upper levels separate into two penthouses. The second storey is pushed back beacuse of code requirement, generating two private terraces for each penthouse.