The setting of the building breaks up with the traditional way of location (background concept compared to the middle of the lot) It leans on the south side of the lot in order to achieve the best views from the rooms (north), as well as keep and respect most of the existing pine trees therein. The architecture thus takes a simple shape opened to one of its sides and giving its back to the other, reinforcing the search mentioned above.

The housing program is developed mainly in one floor. It is set as a bar along which different spaces are located. Outdoor spaces for recreation (swimming pool and barbecue) live at this level. The housing service area is set in a lower level.

Key premises of the project have been taking advantage of the various expressive possibilities of brick and taking care for the entirety of the project. It was sought for this expression to be revealed exhaustively in every detail of the housing, not only in horizontal and vertical walls, but also outdoors and indoors. To do so, different rigs have been carefully combined. Thus, the brick formed an integral part of the projecting act.

The housing, almost five meters cantilever, covers the access stairs (folded, reinforced concrete). The latter connects the underground to the main level. The composition of windows on the south façade responds to interior and exterior requirements. Specially selected views open from the inside. Outside, they are integral part of the façade design 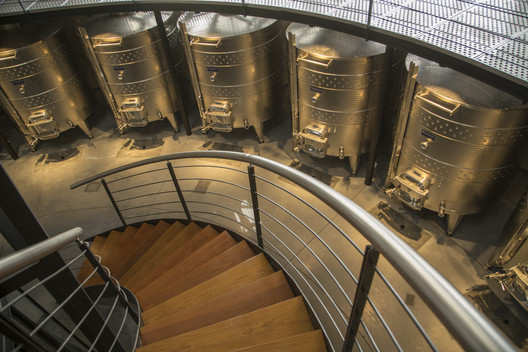