PLASMA Studio, in collaboration with Groundlab, won first prize in an international competition to masterplan the relocation of the Innichen/San Candido train station in North Italy. The project, now under construction, forms a new "Mobile Centre" that integrates a new public plaza, skate park, youth centre and more into a streamlined rail station that enhances connectivity throughout the town.

More information, after the break...

The relocation of Innichen/San Candido train station is triggering a new configuration of the surrounding areas with the design of a new train station with bus station, bicycle depot and car parking in close proximity to Innichen's pedestrianized historic core.

This project relies on a deep understanding of the grounds and its manipulation to choreograph through topography the infrastructural works and public space required. An extensive public plaza in front of the new train station is the core of the intervention. It organises the overall movements and circulation by smoothly dropping the flow beneath the rail tracks and forming a new pedestrian and bike connection to the northern part of town.

This plaza thus forms a nodal link between the town centre, the northern and western part of town and through the multiple transportation links to the many outlying villages and further afield. It also integrates the surrounding streets and two listed buildings as a expansive yet cohesive groundscape. The relatively new concept of 'shared space'- meaning that all traffic participants have equal rights and negotiate intuitively- requires a careful differentiation of the surface to create various zones and clear patterns of movement. This is being supported by integrated specific street furniture and lighting strategies. Most of the plaza is formed by small elongated granite blocks with seating as unfolded elements from black steel and timber.

On the northern side of the plaza, the new bus station is morphologically intertwined with the train tracks by partially carving into it, forming south-facing protected outdoor seating for waiting passengers. A long ramp runs forms the eastern edge of the plaza and brings passengers directly to the raised level of the rail tracks. Beneath we located a small cafe and offices. Furthermore, the plaza design unravels the hidden potentials of the location by incorporating the valuable old church and the river that flows alongside.

The new underpass forms a natural extension to the plaza. Here we locate the central waiting lounge that serves both train and bus passengers, a bike depot, lifts and staircases to access the rail platforms above and a ramp that leads to the partially buried car park.

The train station itself is thus greatly reduced in appearance and completely integrated into the context. Added to this the Project also reorganises the areas in front of the old train station which will be free up thus allowing the introduction of new programs with new activities for the town. The proposal uses this space to create a unique ‘Innichen showcase’ where local products like bacon, mineral water, felt, linen, etc. are to be display. This territory works as a transition area and attraction for visitors and residents from the north of the municipality and beyond. 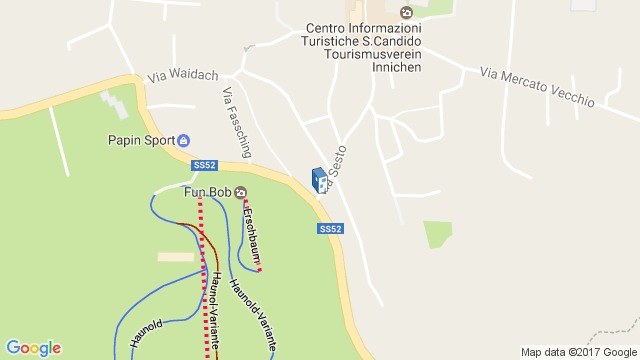