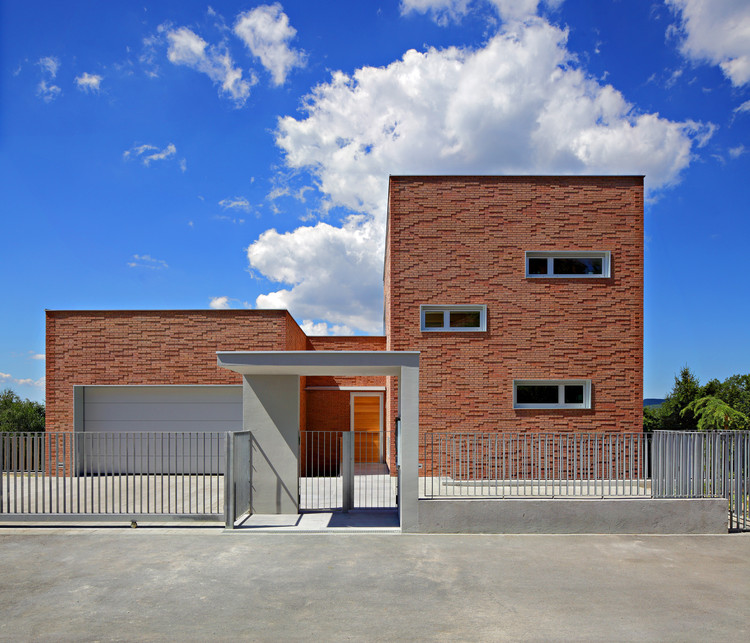 Text description provided by the architects. The spatial composition of the house is defined by the steeply sloping terrain and the view to the city. Its interior has been structured vertically.

The two volumes are linked by means of a closed corridor at the height of the ground floor, as well as that of the lowest level in the house. The spatial flow within the house is intertwined and multilayered. Ground plan with three entrances is the most conspicuous feature of this building. The main entrance to the apartment is at the level of the road, a secondary entrance in the northern facade of the larger volume leads to a maisonette, while the side entrance of the guest apartment in the smaller house is hidden in the staircase passage between the two volumes. Another specificity of the house is the fusion of functions on the four levels, which makes the spaces appear fragmented. The living room is also divided into two parts, one half occupying the highest level as a salon with a view to the city, and another the lowest level, directly linked to the garden. Concept of spatial complexity extends to the exterior as well. The research has not stopped at the volume modelling, but also focuses on the mutual relationship between the two masses: one larger yet carved, and another smaller yet compact. Doors and windows are cut into the mass, which enhances the monolithic, bloc-like character of the volume. Even the openings of larger dimensions do not diminish the feeling of solidarity and stability. The balcony, the pergola, the niche, and the passage are sculptural elements that accentuate the front facade.

Even though the house is painted from the outside in earthen colour, which functions as an element of landscape, the accent in design is not on colour, but rather on texture. The clinker tiles of varied thickness are arranged so as to form a three-dimensional mosaic with an agitated and flickering cover. Its flicker indicates that it is only a mantle or curtain around the body of the house.