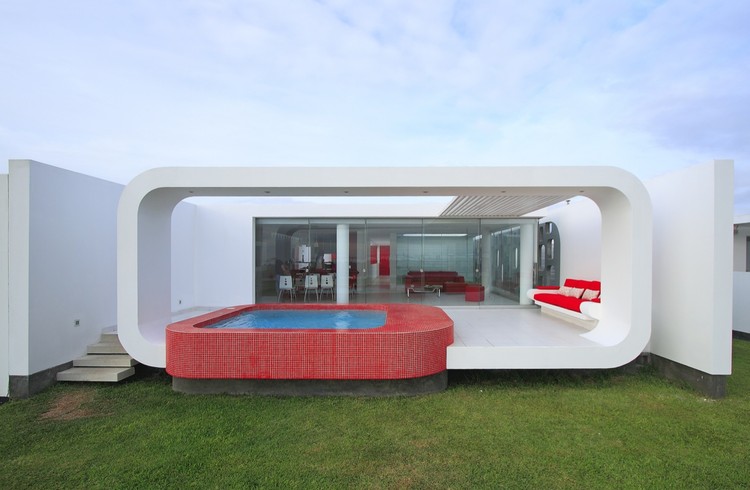 Text description provided by the architects. The house is located on the first row of lots and was designed so that the architecture acted like a frame to the view of the beach and the islands that are found in front  of the house. The esthetic of the house celebrates the summer with modern curves that remind us of the Brazilian architecture of the sixties.

The whole house has a white finish with color accents in red, in both main elements such as the swimming pool as well as furnishings. The house reminds us of competitive elements used in Stanley Kubrick films, with the white curved elements contrasted with details in red. The exterior was designed as a white elevated box, exposed from its front side.  One of the sides has a concrete lattice based on a contemporary composition  with perforations that allow the interior to have a transparency without losing its intimacy.

The dining and living room are placed so that they can be integrate with the terrace by sliding the glass doors.An interior patio was developed on a lower level where the bedrooms and family room conjoin so that an intimate zone for these rooms are created. The main bedroom is located on the first level and was designed so that it had a view towards the ocean.

As a whole the house created a contrast of red color over white surfaces, in a way that the spaces give an appearance of amplitude.  From the inside of the living room, the architecture offers a frame that shows the landscape of the beach, the island and the sunset. 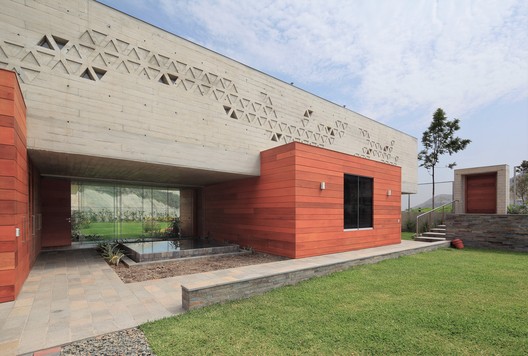