Save
Blairgowrie Back Beach / Wolveridge Architects 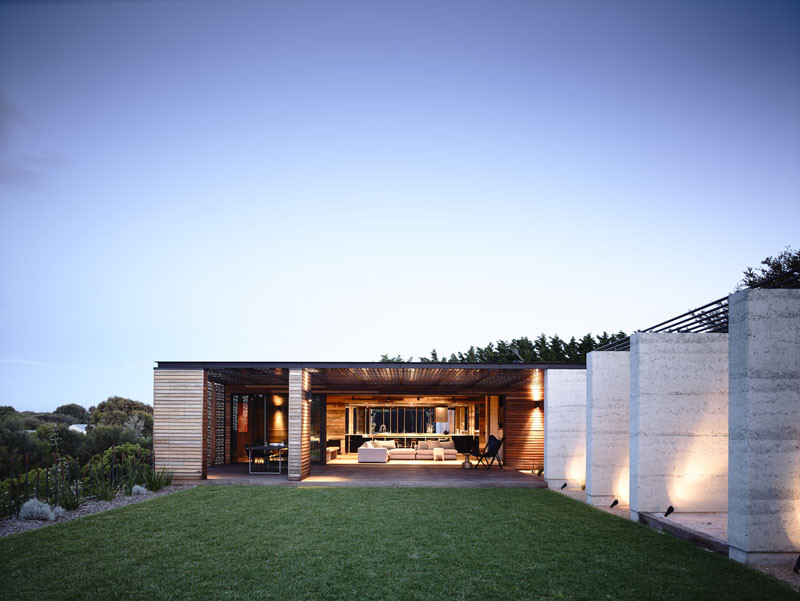 Text description provided by the architects. The clients for this project approached us around Easter in 2011. They are a young family from the city who had purchased this terrific sloping allotment just five minutes’ walk from Blairgowrie’s back beach along Bass Strait. The land form was dominated by an awkward contour and it was clear that the site was halfway up a dune. The block to the west was the top of the dune and the vacant block to the east was the bottom. There was native vegetation, but it was sporadic and insignificant.

We were briefed to provide a family home that would give plenty of outdoor space and play area for the kids and their friends, but most importantly the brief insisted that the feel of the house be quite divorced from reminders of life in the city.

We studied the land form and we studied the planning requirements. We then prepared a building envelope, placing the dwelling as far to the rear (south) of the lot as possible, providing a terrific expanse of open space to the north. By the time we pushed the form back, it was significantly elevated.

As the founding materials are sand, we undertook a major rethink of the land form and the site’s contours by excavating under the dwelling area to create a large undercroft and lower ground floor rumpus area and used that fill to create a north facing quadrangle at the upper level.

The result is an apparent single storey, low slung dwelling on arrival.

A further challenge contemplated the public aspect. The road is located north of the site, therefore a driveway for car parking and arrivals needed to consider how we might plan to make this open space private. We employed a permeable but physical barrier dissecting the public and private aspects of the dwelling. The form of the barrier, a series of free standing steel sheets with 100mm gaps exists as a sculptural element in the landscape, evoking images of the found object.

Access to the dwelling is external, via a garden path defined by a further device, a line of pillars constructed from rammed earth also emerging as objects in the landscape, seemingly moulded by the conditions over time. This element clearly defines the public and private realms, yet provides crossovers and transitional spaces in the form of a sandpit, an outdoor shower area and landscape planting zones.

The dwelling itself is conceived over four main modules. Two main living zones separated by a services zone which is located directly over the rumpus room below. The fourth module is the semi roofed external living area, linking the dwelling interior with the landscape.

The clients embraced a robust approach to the design of the dwelling. The plan form is rectilinear, with hallways wide enough for kids to ride their bikes. A second linking bbq deck completes the circuit.

The materials are generally recycled timbers, with blackened plywood walls, a black ceiling which encourages the enjoyment of light and the externally framed views of the landscape. The bathrooms are glossy heat treated mild steel which reflect the colour of the mosaic tiled floors and the shafts of light from the skylights. At night, the sheets imbue a warmth in reflection of incandescent light.

One of the owners grew up in Eltham, a rural bushland retreat east of the city in a house designed by Alistair Knox. The imagery portrayed by the client of a childhood memory growing up in a Knox dwelling had a significant impact on the project. We considered the use of breeze block and concrete block to provide reminders and links back to notions of the surf clubhouse. Through development of the design, these elements became more refined with the use of rammed earth and the implementation of laser cut screens employing one of the common motifs of the breeze block.