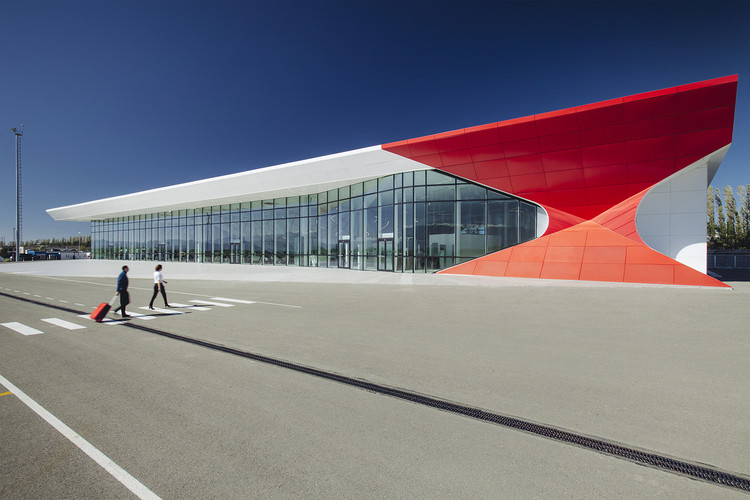 Text description provided by the architects. Kutaisi International Airport serves domestic and international flights for use by tourists, national politicians and international diplomats. The airport will become a central hub, with up to one million travellers targeted in 2014-2015, celebrating a leisure or activity holiday anywhere in the ever more popular destination of Georgia.

UNStudio’s design for the new airport incorporates both Georgia’s historic landscape and its architecture. In Georgia public buildings and private houses employ their entrance lobbies as showcases for their individual identities. In the design for the new airport UNStudio embraces this architectural concept in order to manifest Georgia’s young and dynamic democracy, along with its rapid development as a main crossing point in the region. Georgia is located on a crossroads of rich cultures, with a history of travellers passing through the Caucasus or arriving from the Black Sea. UNStudio’s design comprises the full airport development, including a revision of the runway, the master plan for the landscape and planned future development thereof, the terminal building, offices, a meteorological station and the air traffic control tower. Regulations for the airport were strict and comprised of a mix of European and Georgian standards, including earthquake zoning 8 requirements. The project was designed and constructed in two years, under lead consultancy of UNStudio, with the airport already having begun operations by September 2012. Both design and construction saw the involvement of numerous local and international companies, with openness and knowledge sharing proving to be essential to fulfilling the tight schedule. The steel structure of the terminal - produced and shipped from Hungary - recently won a European steel prize award. Actual figures of the airport show 30 flights per week increasing in spring 2014 to 40, by which time direct flights from Western Europe to Kutaisi will also be possible.

The architecture of the terminal refers to a gateway, in which a clear structural layout creates an all-encompassing and protective volume. Both the exterior corner detail – which functions as a crossing-point and point of recognition - and the so called umbrella structure within the terminal building – which operates as a roundabout for passenger flows - operate as the two main architectural details around which all of the airport functions are organised. The umbrella further guarantees views from the terminal plaza to the apron and to the Caucasus on the horizon and vice versa. The central point in the umbrella is an exterior patio which is used for departing passengers.  The transparent space around this central area is designed to ensure that flows of passengers are smooth and that departure and arrival flows do not coincide. The design organises the logistical processes, provides optimal security and ensures that the traveller has sufficient space to circulate comfortably. Serving as a lobby to Georgia, the terminal will in addition operate as a café and art gallery, displaying works by young Georgian artists and thereby presenting a further identifier of contemporary Georgian culture.

The 55m high Air Traffic Control Tower and its supporting office/operational building is designed to complement the design of the terminal. The tower’s strong appearance makes it a beacon of the airport and surrounding area. The traffic control cabin on the top level forms the focal point of the tower, with a 360 degrees view on the surrounding landscape. A spacious and comfortable interior ensures a workspace for 4-8 operators with optimal concentration. The exterior of the tower is clad with a perforated skin on a concrete core to use wind for ventilation purposes. LED Light in-between the skin and the core enhance the beacon effect of the tower at dusk and dawn by changing color whenever there is a fluctuation in wind speed.

The design for the new airport incorporates numerous sustainable elements. A large onsite underground source of natural water provides the basis for the reduction of energy consumption through concrete core activation and use for sprinkler basins. The floors of both the terminal and the traffic control tower will utilise this water for maintaining a regulated temperature in the two volumes. In the terminal building cantilevered roofs provide sun shading on south and southwest zones. A hybrid low pressure ventilation system is integrated into the terminal's main structure and there is a grey water collection system in the floor underneath the terminal building. A future aim is to present Kutaisi airport as Georgia’s first airport to incorporate a strict segregation of waste and establish a recycling system which could be further implemented into new and existing projects in Georgia. 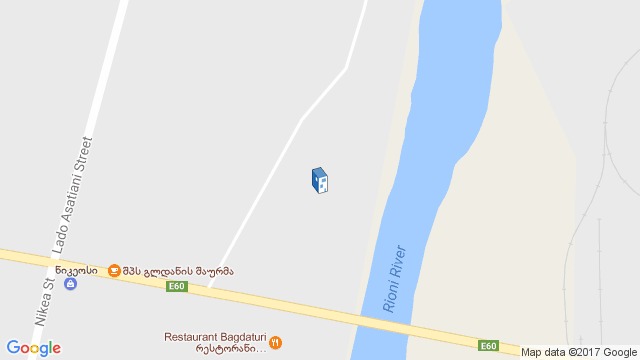