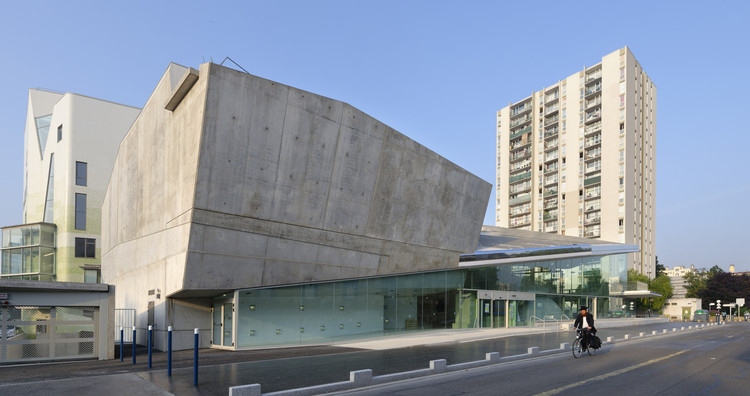 Text description provided by the architects. The conservatory site presents a complex, shifting urban space. At the foot of a thirty year old apartment block, in line with the strikingly designed swimming pool and opposite the local theatre, the Aubervilliers conservatory, with its highly respected cultural programme, is a crucial element in the town’s urban landscape.

The Chochon Pierre Agency has sought to create a dialogue, rather than making a classic statement with the building as a standalone structure.As such, the design developed around a straightforward idea:to not build too high so as to not overbear the local theatre, and not cast a permanent shadow on the roads surrounding the site.

It was preferable to design a structure that would house both the Regional Conservatory for dance and music (CRR) and the Multidisciplinary Cultural Space (ECT).

Using a simple system of doors and panels, both on the ground floor and the first floor, it is possible to provide shared access for the two organizations or to separate them.

The multidisciplinary cultural space is the most public part of the project.Running along the Rue Firmin-Gémier, its foyer opens directly onto the corner of the Rue Edouard-Poisson.It thus entertains a close relationship with the local theatre as a space which hosts artistic activities.

The functional design for the ECT is simple:foyer, cafeteria, dressing rooms, offices, south-facing terrace and auditorium with flexible layout.The three levels of galleries around the auditorium project a warm audience presence throughout the playing space and provide moorings for the overhead catwalks which improve working conditions and increase flexibility.The retractable seating makes a number of configurations possible, with a capacity of 1,000 standing and 146 seated.To complement this flexible layout, classic curtains along the side and back of the stage provide acoustic quality alongside reversible panels fitted on split hinges.

The conservatory entrance is a fissure which floods light into the building, guiding visitors.

At the centre of the plot, the structure is not subject to the 25 metre height limit and can therefore accommodate a vertical development of conservatory life, towards the light, far off views and the trees on Stalingrad Square.

The conservatory includes a shared hallway, an auditorium and music and dance classes.

The shared hallway, the hub of the conservatory, sits at the heart of the plot and winds through the building's foundations.Doors providing public access to the auditorium are spread out along the way.

Particular attention has been paid to making the volume of the auditorium stage flexible.Panels have been fitted at the sides and the back of the stage to a mobile ceiling, so as to be able to adjust the stage space and provide intimacy between audiences and musicians, whatever their particular needs.Here again, a raised peripheral gallery encourages a less dramaturgical relationship to the stage.

The teaching facilities for instruments are on the upper floors.Music theory classes are placed between the upper and lower spaces, immediately next to the cafeteria and the hall and close to the offices.For the music classrooms, the Chochon Pierre agency has opted for economical architectural principles based on utility. For example, window size is defined by the required levels of insulation.

A rooftop rock garden is open to students as a space to relax.Special attention has also been paid to the fifth façade, to ensure that the views for residents of the apartment block on Rue Gémier are not spoilt.

The design is neither submissive nor condescending, but always open to the surrounding architectural strata, ensuring that the project is grounded in its contemporary context and belongs to the town of Aubervilliers. 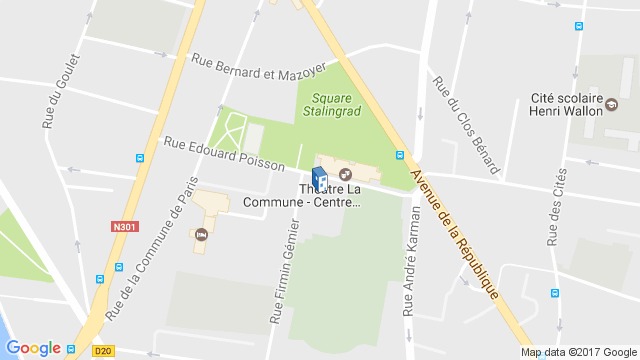 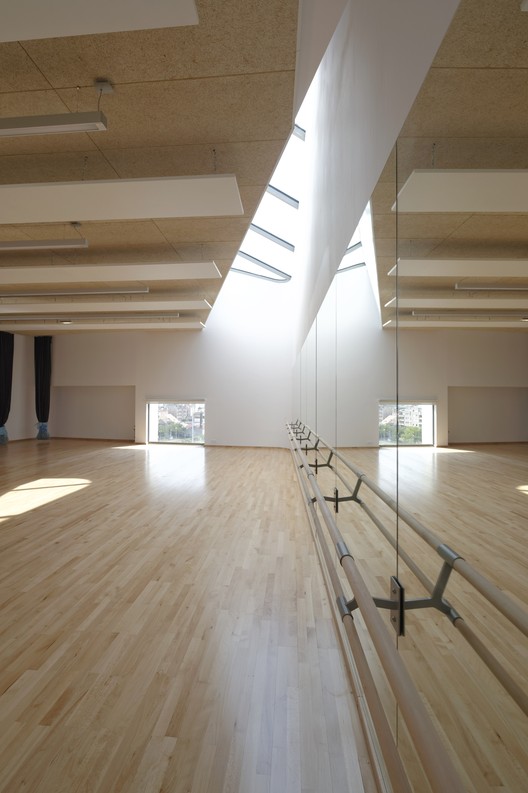