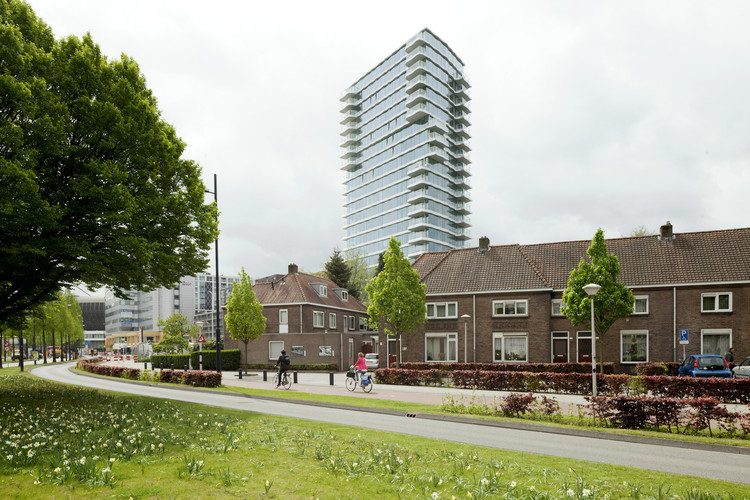 Text description provided by the architects. This housing project is located within a former industrial area in the city of Eindhoven that was redeveloped into a residential neighborhood named Stripe S and composed of two building blocks. The E’ Tower forms the entry to this new development, with 110 apartments dispersed across its 22 floors, while a separate auxiliary building echoing the former’s façade rises 10 stories and consists of 36 apartments. This auxiliary building is situated along a road bisecting the neighborhood. The tower’s eastern façade has been receded from the adjacent building block to enable its complete fenestration in spite of its corner location, while at ground level the southern façade has been extended to create an operable glass gate. Flanked by the tower and a five-story building that mirrors its brise-soleiled façade, this glass gate provides access to the neighborhood’s non-public courtyard while softening its procession of entry.

Both of these new buildings have been organized around highly efficient cores, maximizing their inhabitable floor space. As such, the tower’s lobby has been elevated .7 meter above street level, distancing itself from its immediate surroundings to denote its rather private character. Its windows have been fritted with pixilated dots, which vary in both diameter and placement, focusing at a distance to compose an image of curtains fluttering in the wind. These floor-to-ceiling glass façades provide the lobby and apartments with extraordinary light, views, and space. Offering to its residents amenities more-often found in short-stay hotels, the tower also features a furnished reading nook, a custom-designed concierge corner, and private hospitality-boxes, positioning the building to cater to Eindhoven’s urban professionals and rather established couples.

The E’ Tower borders a residential district dating from 1910 originally built to house employees of the area’s now partially demolished Philips factories. These historic homes were built in the Brick Expressionist style of construction that flourished in the early twentieth century throughout Northern Europe. By reinterpreting these industrial brick façades, and thus the city’s industrial past, the project creates a new residential typology that imparts the vernacular brick mode of construction onto twenty-first century materials, namely glass and aluminum. This innovation is evident in the project’s expressive layering of brise-soleil, which impart a play of shadow and light onto the façades and into each apartment. The project is therefore a shard of transparency set amongst a dense sea of century-old brick.

Every apartment in both the E’ Tower and its auxiliary building feature a balcony of 2x5 meters able to accommodate a dinner party of six, while internal conservatories also serve as an extra room–or winter garden–during the year’s cooler months. The project’s structure is composed of poured in place concrete on the ground and first floors, physically anchoring it to its site, with prefabricated components used throughout its remaining floors, including the custom-composed and clover leafed columns. These rounded columns impart a fluidity within the interiors, eliminating any harsh edge of exposed raw concrete, contributing to a greater sense of ‘movement’ within both buildings, expanding their capacity for interiority. 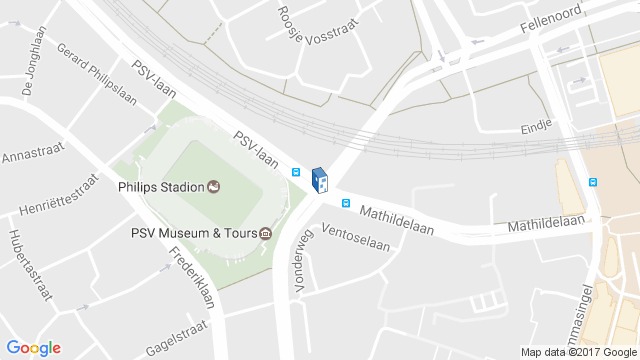