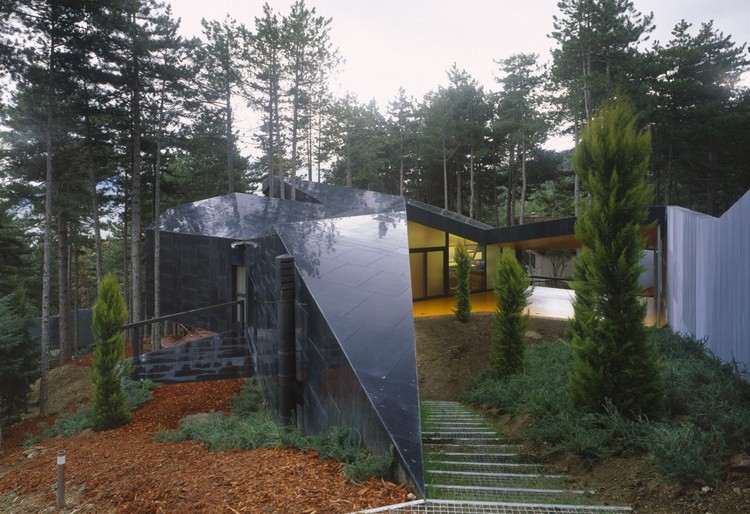 Text description provided by the architects. For the concept of this home, we asked ourselves wheather we were capable of building something while maintaining the utmost respect for the natural surroundings, avoiding speaking about sustainability, alternative energy or ecology as a veneer for modernity and political correctness. Perhaps it was ultimately a question of making the most of the qualities of the given natural environment, maintaining the utmost respect for the natural qualities afforded to us, and having a minimum impact on them. We thought that a good way to start might be to adapt the volumetric line of the building to the existing forest, leaving the plantation to choose the way it would be experienced. As the starting point for this process, we identified the clusters of trees that work together in the forest while we dared to call everything that lies outside them the “anti-forest” or construction-susceptible void, without having to remove any trees. We generated a flat geometry on top of this void to avoid the trunks and take the heights from the existing ground level and the slopes of the roof planes permitted by the by-laws. This operation appeared to be an immensely complex part of the process, and forced us to do numerous tests until to arrived at the solution that met all the parameters at every point of the final volumetrics. What appeared was a non-Cartesian geometry with a faceted volume that adapted to the topographic conditions and the planning requirements, inciting us to resolve the brief for this home in an exciting space. The geometry is what will define and discover the ways of experiencing the spaces and their relationships with the outside landscape, a surprising, fruitful relationship between a forest and strict regulations.

The personal circumstances of the owner prevent a conventional use of the configuration and usage of this home. We had to generate spaces that would adapt in time and programmes to the owner’s idiosyncrasies. We thus gradually define the possibilities afforded by the resulting geometry, analysing the space in what we call “specialised fingers”, each one of which houses a specific programme, with a particularised spatial resolution. The height differences on the allotment impel us towards a way of understanding the house in half-storey steps that allows us to control the division of the interior into two dwellings in one. On the other hand, we have located the family’s visiting rooms (two fingers) associated with a games room (one finger) and the main entrance to the house all on the highest level with an independent entrance. The rest of the volume follows a successive development of privacy as we descent, first with the living room/bar and the projection room/studio (one finger) and on the immediately lower level, a leisure programme with a heated indoor pool (one finger), another with a kitchen-dining-general purpose room (one finger) and a large covered outdoor terrace (one finger). Descending to the final level we discover the main bedroom with its bathrooms (one finger), a gym/general purpose room and the sauna (one finger).

Once inside this fabulous landscape, we want to make the most of its features and open up to the maximum influence of its geometric, light and spatial conditions. From this perspective, the envelopment of the house had gradually transformed its glass and stone skins according to the proximity of the trees, their ability to provide shade, their presence and the type of programme in each specialised finger. So in order to bring all the rooms into direct, intimate contact with the exterior, the skins that define the broken volume have etched transparencies, opacities or screenprints with differing densities on its components, the influence of the forest on this strange object that has invaded the tranquillity of its territory. Inside the home, the floors, walls and flowing ceilings of amber resin absorb wooden slats that allow the abstract presence of the forest to enter and blur the outside/inside divisions as if our interior space were a fossil even before it existed. A strange feature slides along the upper floors, a reflection of the owner’s collector behaviour. 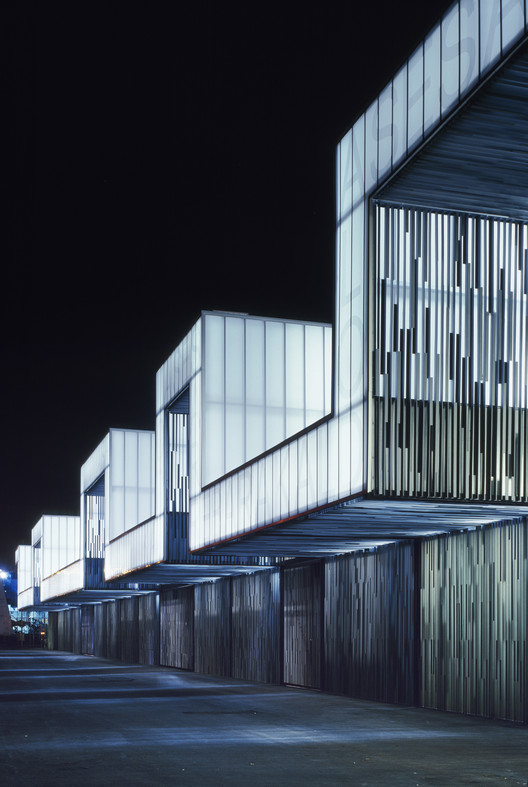