Keep an eye out, or you might miss the Museu Brasileiro de Escultura (a.k.a. MuBE, pronounced MOO-bee). Widely considered the masterpiece of Pritzker Prize-winner Paulo Mendes da Rocha, the building was in fact born out of the desire to have no building at all. When in the 1980s an empty lot in Sao Paulo's mansion-laden Jardins district was slated to become a shopping mall, wealthy residents successfully lobbied to create a public square instead. To sweeten the deal and ensure the land stayed commercial-free, they hired Mendes de Rocha to create MuBE. Completed in 1995, the 7000-sq-meter museum hunkers down beneath ground level, thus preserving what in Sao Paulo is that rarest of luxuries: a public green space.

A protegé of Vilanova Artigas, Mendes da Rocha has long been associated with the so-called Paulista school, also known as Brazilian Brutalism. Its adherents, including Joaquim Guedes and Lina Bo Bardi, are known for spanning vast spaces using the simplest materials and forms -- above all, long blocks of raw concrete. At MuBE, Mendes de Rocha had to severely limit this desire to make mass float, since most of the museum lies underground. However, he does include one classically Brutalist outcropping -- a long, difficult-to-define structure that looks something like a long table or bench. Besides providing shelter from the city's fierce sun and summer downpours, it subtly defines the space of the outdoor sculpture gardens.

Created by great landscape architect Roberto Burle Marx, the gardens are more than just a pretty adjunct to Mendes de Rocha's project. They form an integral part of the museum itself, displaying monumental works by modernist sculptures like Ivald Granato and Francisco Brennand. Standing amid these works, there is little indication that you are also on top of a vast museum. Yet the curving shapes of nature do gradually give way to concrete and sharp geometric forms of the museum's roof. Finally, steps and ramps lead down to MuBE's half-buried entrance.

The museum's interior consists of a honeycomb of rooms that house administrative offices as well as a school of art. Beyond them lie the cave-like galleries, whose unbroken, horizontal stretches of concrete make the spaces seem even vaster than they actually are. Just as the museum itself seeks to disappear within the larger urban environment, these galleries deliver up great quantities of negative space, which can be configured and reconfigured in an endless variety of ways -- ideal for the display of sculpture.

But Mendes da Rocha's design is becomes most striking at the seam where exterior and interior are made to meet. A kind of floating garden begins near the museum entrance and seems to reach into the building itself. While the garden's built forms are rigidly geometric, tropical plantings effulge from square concrete planters. Several of the squares serve as pedestals for choice members of the museum's collection. But one is left entirely empty. Perhaps it is a plinth waiting some ideal sculpture of the future. Or perhaps it is a kind of stepping stone, inviting us into the imaginary space the museum occupies. 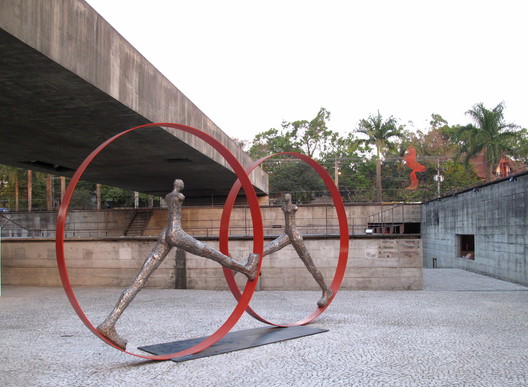