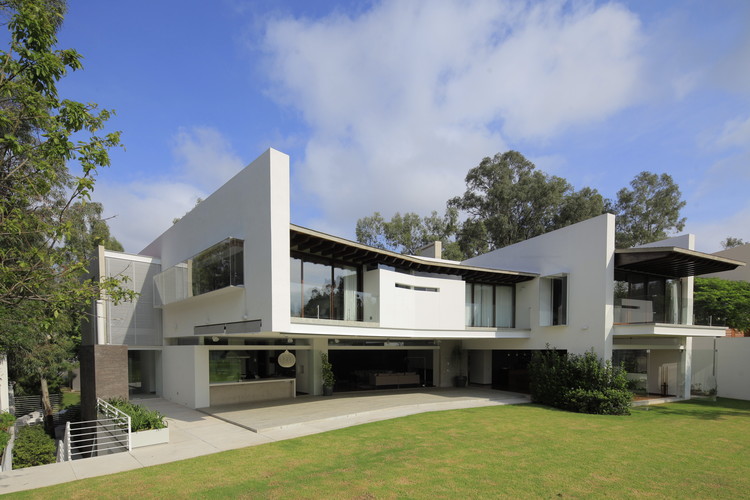 Text description provided by the architects. The terrain is a flat and raised platform, the house is positioned on a north-south axis generating an extraordinary view towards the west, where almost all views are directed to. On the front there is a steep street, allowing the entries on two different levels: the main level, where the social area of the house is located and the other in the basement, for cars and services. The third level contains the private areas of the house.

The house concept uses the irregular shape of the land to develop a relationship between their volumes. We placed two parallel bodies on each of its adjacencies north and south, making a big diamond shaped void in the center as the protagonist of the project. This double height void is crossed only by the bridge on the west and the flown volume of the rooms.

The volumes express themselves differently to the front and the back. To the north stands a large body flown over a wooden wall generating a foyer welcoming the visitor. This body brakes inside to form a green area behind the wooden wall to protect the living from the afternoon sun. To the south, lies a vertical body born from the basement that top off on the highest part of the house, it disappears on the back giving freedom to a third volume that unfolds and contains the garden. The façade facing the street creates a block game between the existing trees, the tops of the courtyard trees and the sloping garden on the front.

The house is open and transparent in the social areas but, at the same time, it achieves a very strong privacy in the private area. Spaces interweave in a very fluid way, the vestibule on the main entrance, where the main stairs emerge, it is bordered by the inner courtyard. Going forward, the space opens completely in the living-dining room area, which is bounded only by a diagonal wall in front of the fireplace that stands as a huge concrete monolith which crosses the double height, additionally, it makes a dramatic connection to the inner courtyard. On the other side it opens towards the large terrace which is the most generous and important space of the house.

In the south volume, there’s a private area of the house, a studio with a vertical window towards the courtyard and another longitudinal facing the street. This studio is separated from the kitchen only by a wooden block where the pantry was placed; it separates the two rooms and serves as a visual end point from the entry hall. These two zones communicate with the service staircase that links the garden, grill area and outside services that lead to the main terrace.

The terrace is a very generous space, boomerang shaped, containing a living area and a dining connected directly with the kitchen. It has no columns; it is a large cantilever formed by the body of the second floor and opens dramatically to the east and south.

To the north lies the game room that also unfolds onto the terrace and has direct communication with the garden, which is sloping upwards on the back to create depth and direct the eyes to the horizon, while simultaneously gives privacy to the house. The "L" shaped position allows turning to the south; taking advantage the neighboring house is very low, it is possible to orient the view above it toward the wooded area, and thus the house embraces the landscape.

The upper floor is made in two bodies, detaching the children's rooms from the master bedroom, and an independent room that can work for visitors. The master bedroom is located above the game room as an arm that sets onto the garden. It has a very generous closet space and separate bathroom area. The children's rooms are communicated to a family room that turns onto the double height, but also can be closed to give privacy. At this point you there’s also the gym that opens onto the courtyard.

The gated community requires at least 70% of inclined roofs; we made a wood and steel apparent structure. It is covered on top with iron oxide coated ceramic.

Few materials were used to emphasize the volumes of the house. Downstairs the floors are wood and large format marble pieces. Some walls are covered in cumarú wood on the facade, and straps of black America limestone on the back. The wood used in carpentry is walnut, there are specific concrete volumes and the rest are plastered walls. 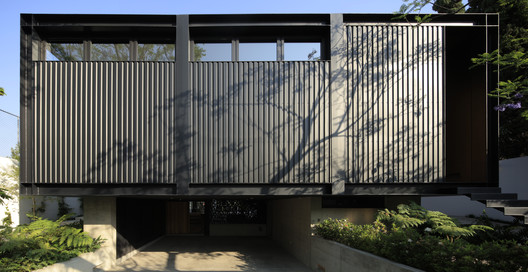